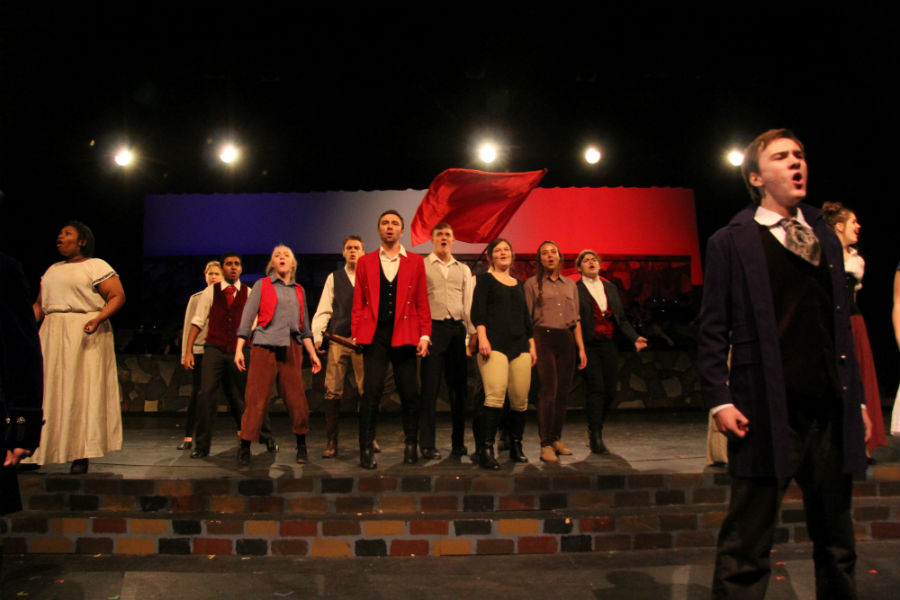 Carter Seaborn, as Enjolras, leads the cast during "One Day More" in Les Mis.

On May 11-13, 2017, Midlo’s Theater Department put on strong performances of the musical, Les Misérables, co-directed by Mrs. Katherine Baugher and Sean Dudley. The show sold out two nights in a row and left audiences in awe. The unique set was designed by Micah Mitten and built by Midlo’s stage crew. Rebekah Adams and Eddie Thomas stage-managed the popular show, which made each performance run as smoothly as possible. Lighting, designed by Erick S. Taylor and Noah Dorman, truly pulled the show together.  Despite not having their usual leader, the running crew added so much life to the stage from behind the scenes. Additionally, Mr. Tom Baynham jumped right into being the musical director for this show. Moreover, the live orchestra, led by Mr. Gordon Rawl, played for roughly 2 hours and 15 minutes with only a 15 minute break. The impressive dedication from those students contributed significantly to the dramatic effect of the show.

The vocals within the show left a lasting impact on audience members. The lead of the show, Jean Valjean, (Garrett Redden), struggles to escape his past. Antagonist Javert (John El-Jor) chases after Valjean to seek justice. While running away from his duties on parole, he meets a prostitute, Fantine (Maddie Sheffler), which leads him to care for her young daughter, Cosette (Sophia Nadder). The sophistication within Nadder’s voice, despite her young age, made Castle On A Cloud one of the most memorable songs in the show. Then, the Thenardiers come into the picture to look after Baby Cosette. Madame Thenardier, comedically played by Sophia Trout, and Monsieur Thenardier, masterfully played by Gabe Fenyes, offer comedic relief. The duo sang Master Of The House, alongside a large number of ensemble members. This song proved a fan favorite due to its liveliness and comedic aspects.

Towards the end of Act One, Enjolras, (Carter Seaborn), Marius, (Will Johnson), and Gavroche, (Emily Peachee), come on stage to recruit the Paris poor for the revolution. During this scene, Marius meets the adult version of Cosette (Bailey Blair). Eponine (Katie Murphy) is in love with Marius, which leads the trio to sing the famous song A Heart Full Of Love. The vocals in this song truly revealed the raw talent of Midlo’s Theater Department. Another notable song, Stars, sung by John El-Jor, made audiences go wild due to the strength in his vocals. The show’s most popular song, One Day More, set the stage for the rest of the show. Showing that the revolutionaries will fight for their rights sets the stage for the love triangle between Marius, Cosette, and Eponine.

The second act revolves around the war. Carter Seaborn’s character powerfully leads his troop of students to building the barricade. When Gavroche sacrifices himself for ammunition, it leads the rest of students to fight to their deaths. Some of the most notable songs, Drink With Me, with solos from Cooper Hoke, James Fuller, Vraj Gandhi, and James Pridgen, and ABC Cafe with solos from Carter Seaborn and Will Johnson, left audiences filled with emotion, as the characters sacrifice for their beliefs. Empty Chairs at Empty Tables, sung by Will Johnson, concluded the students’ scenes, as their ghosts come back while Marius shows his guilt for surviving the barricade.

The show concludes with Javert committing suicide because he does not want to live in Jean Valjean’s debt after he saves his life. Cosette and Marius marry, which brings the Thenardiers back into the picture. Additionally, Jean Valjean dies from old age, so Fantine and Eponine come back from the dead to help lead him towards the light. During the epilogue, the entire cast returned to the stage to finish the play.  Les Misérables is one of the most impactful shows that Midlo’s Theater Department has produced, and the vocal and acting ability of Midlo’s Theater students definitely wowed audiences.