Seniors Defeat Faculty for First Time in a Half Decade: Senior vs. Faculty Basketball Game 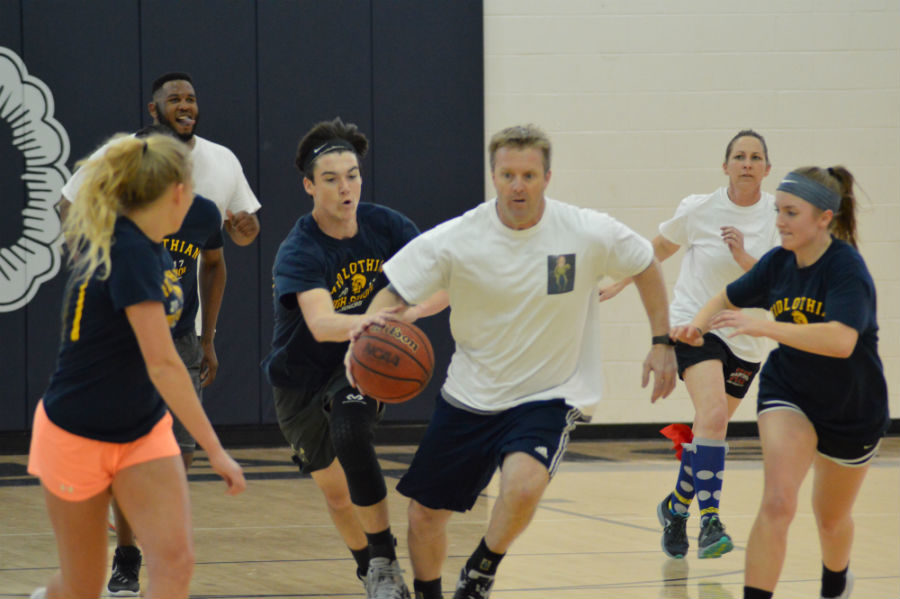 The game got underway quick as Jermani Brown, Taylor Ampy and Jason Goodwin scored quickly.  Senior Lana Figg hit a surprising barrage of 3 pointers that not only ran up the score but gave a boost of energy to the seniors. As the lead got larger and larger, senior Peyton Neff unsuccessfully attempted to dunk on a fast break. The seniors headed into the locker room with a double digit lead, feeling great about their first half performance.

At halftime, Ragtag, which includes Daniel Moore on vocals, Noah Saint-Pierre on piano, Brandon Brown on drums, Anthony Mantz on bass and Andrew Hardington on guitar. performed a mix of classic rock songs.

As the halftime show concluded, the game resumed, and the teachers, led by principal Shawn Abel, caught back up quickly. They cut what was once a double-digit lead to as little as 5, as the students fell into a lackadaisical defensive state. A couple of quick subs by coaches Tina Lindenfeld and Lucas Via helped propel the students back into the lead, thus securing the first victory for the students that the class of 2017 has ever seen.

Senior Lara Ann Douglas, who watched from the sideline, summed up the game by stating, “It’s always fun watching my teachers play. Mr. Java’s enthusiasm really made for an enjoyable basketball game as a whole.” After the game, the students dispersed, marking the commencement of the school week and the start of Spring Break.