Leaving It All on the Court 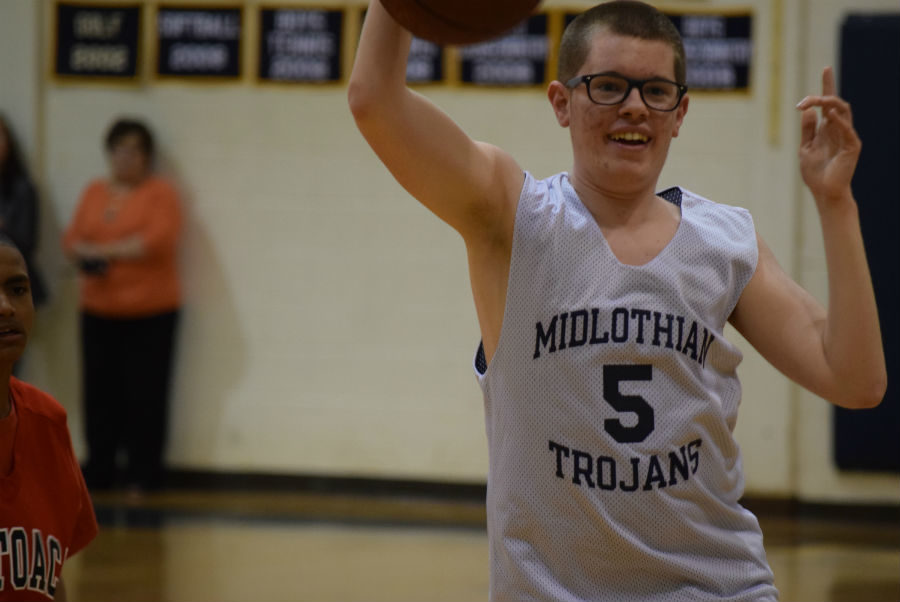 Jacob Phillips shows his love for the game of basketball.

The Midlothian Medford Basketball team closed out its first season ever on February 23rd with a game against Matoaca High School. Midlothian High School students and faculty alike came from their lunches to cheer on and support both teams in this final game. Returning players came back to show off their basketball skills, but the team also welcomed a new face; Daniella Nadeau played in her first game of the season.

Throughout the game, the Trojans fought with all their might to come out with a win, but eventually, the team fell short. Leading the team in scores was point guard Gabe Green, who missed the first quarter but made it to the gym in the second to finish out the game with his teammates.  Daniella Nadeau and Joshua Burkes gave a handful of assists to teammates throughout the game.  Along with the players, enthusiastic cheerleaders stood on the sideline cheering for their Trojans, as well as a gym full of enthusiastic fans.

During halftime, Midlo’s very own Trojan band performed, earning a rousing response from the faculty, students, and parents in attendance. Cheerleaders stayed on their feet and kept the crowd excited for the next half.  Senior Lana Figg said, “Being able to participate in such a huge event like this puts a huge smile on my face.” Commentator Lucas Via kept everyone updated with his quick wit and stats of the game, while Will Pomeroy and Will Brown kept the score updated on the clock. Justin Penn and Omar Jackson served as the referees and made sure the teams followed the rules of the game.

At the end of the game, coaches, players, and cheerleaders joined together one last time. Win or lose, the team was happy to be able to play together and have so many people come out and cheer them on. Coach David Brohl said, “Everyone’s a winner. The kids absolutely enjoy the experience and the pride that the crowd shows for them.”