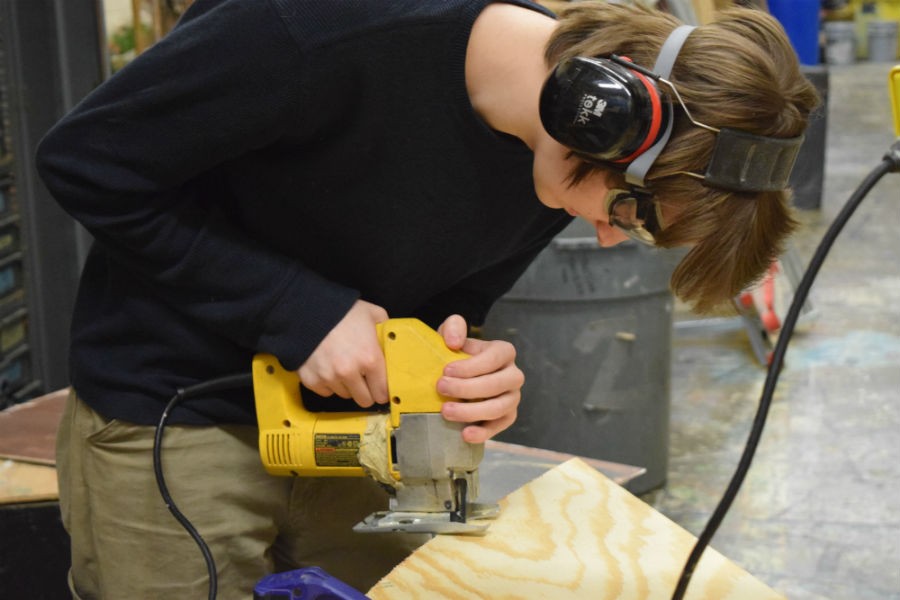 Some of Midlo’s finest spend most of their time covered in sawdust and paint, while they run around in the shadows behind the curtain of the stage. Currently headed by Theater Productions teacher Ryan Gallagher, who dedicates his time daily to teach and guide Midlothian students in the strenuous set building process for the unforgettable plays here in Midlo,  the Midlothian High School Stage Crew is open to all and has welcomed many for decades.

The Theater Department is well known around the community, not only for the acting, but also because of the spectacular sets constructed over the years, thanks to the tremendous talent of this group. Many students have made Midlo Stage Crew a major part of their lives for the duration of their high school careers. When asked about her stage crew experience, Mackenzie Matola, a memorable Stage Crew senior states, ¨The past four years doing stage crew have been times that I will never forget, and it’s given me friendships that I will cherish for the rest of my life.¨ In addition, another key member of Crew, Micah Mitten, approaches his fourth year of stage crew.  After being chosen to stage manage and set design for the first time during his sophomore year, he has made a lasting impact throughout the theater. Mitten says, ¨Stage crew has taught me the value of hard work and dedication. Throughout my years, I’ve really enjoyed putting on top notch technical theater.¨

After the success of first two plays of the 2015-2016 school year, The Secret in the Wings and The Adventures of Huckleberry Finn, the department now prepares for the next musical, Chicago. This thrilling show will be performed May 12, 13, & 14, and the set will no doubt leave the audiences in awe. For this play, the two stage crew members chosen to help design the set are sophomore Rebekah Adams and junior Hailey Bean. When asked the hardest part about designing the set,  Hailey replied, ¨The script doesn’t give much direction to where the scenes are set, and it’s been difficult to decide where the scenes are and what’s in them.¨ Rebekah added, ¨It’s been hard to take the ideas I have in my head and then transfer them on paper for them to be built.¨ Although they both agree that seeing the results come together is extremely rewarding.

In the midst of all the chaos of the set construction, painting, designing light displays and sound tracks, stage crew is so much more than just an after school activity. The Midlo Stage Crew is a home for students, a place to form friendships and develop valuable technical theater skills. A special thank you goes out to Ryan Gallagher and Katherine Baugher for establishing this profound department for Midlo’s students.