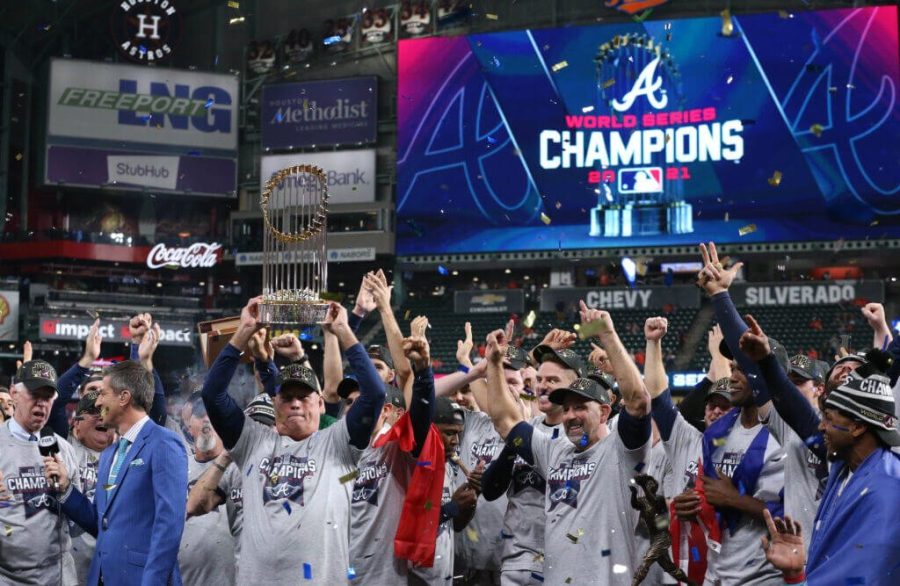 On November 2, 2021, the Atlanta Braves traveled to Houston, Texas to take on the Houston Astros for game six of the World Series. After an extensive and exhausting season for both teams, Atlanta set out to win their first World Series Championship since 1995. On the highly-anticipated night, approximately 12.6 million sports fans tuned in to watch this cross-conference match-up.

The Braves road to the World Series consisted of fifteen in-season trades, which were a major component to how they were able to make it so far in the playoffs. Although Atlanta was the underdog in each of those games, they showed their resilience late in the season when making a comeback against the Philadelphia Phillies who were the initial leaders in the National League East. The Braves eventually beat the Phillies 7-2 in the last game of their season series, which guaranteed Atlanta their fourth straight National League East title and eliminate the Phillies from playoff contention.

As for Houston, the 2021 World Series marked the second World Series appearance in three years after losing twice against the Washington Nationals in 2019 and the Atlanta Braves in 2021. Houston has emerged as a powerhouse in the world of baseball with crushing offensive records and revolutionizing player development.

Heading into the game, all eyes remained on two of the team’s key players. Freddie Freeman, considered by many baseball aficionados to be one of the game’s premier first baseman, guided the Braves throughout the season as he worked to get his first World Series victory. However, Jose Altuve, one of the best hitters in all of baseball, cemented his legacy while being a member of the Astros, so he also intended to add to his successful run with a championship title.

With the Braves as the road team, they began on offense in the first inning of game six. Both teams were struggling to score at the start of the first two innings, however, Atlanta was able to make a comeback in the next inning as they surged to a 3-0 lead with a three-run homer to the left by Jorge Soler, with Ozzie Albies and Eddie Rosario scoring as well.

After the second inning, the pressure started to weigh on the Astros as they needed to respond after the massive home run by the Braves. Unfortunately for Houston, they could not find any spark offensively, which was a reoccurring pattern. Both teams were unable to score in the fourth inning, so the momentum moving forward sided with Atlanta who maintained a commanding lead over Houston heading into the fifth inning.

As the game continued, the Braves opened up the inning at the top of the fifth with a steep 3-0 lead over the Astros who appeared to have championship win within striking distance. After Ozzie Albies got walked and Travis d’Arnaud struck out, the Braves earned two home runs from both Dansby Swanson and Freddie Freeman to extend the lead 6-0. The team’s success came from their offensive pacing and dominating pitching from Max Fried, which allowed them to take even more of a lead over Houston. Eventually, the Braves would seal the game out late with a 7-0 victory with Jorge Soler being recognized as the World Series MVP. The Braves successfully received their first World Series title in over two decades. On the other hand, after a disappointing end to the season for Houston, they are searching for redemption and attempting to bring every player from this year’s roster back next season.

Following the game, fans of the Atlanta Brave rejoiced in the victory and welcomed the team home with a celebratory parade where the city honored each of the players. As for the upcoming season, both teams look to improve their programs in order to hopefully land another spot in next year’s World Series game.