Midlo promotes inclusivity through the Start with Hello initiative 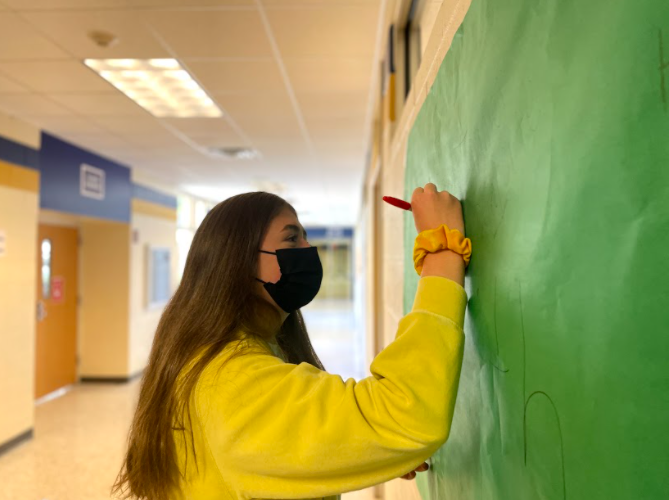 Midlo students were encouraged to sign the Start with Hello banner.

During the week of September 20 through 24, 2021, Midlo honored the twenty-seven lives lost in the tragic 2012 Sandy Hook Elementary School shooting by taking part in the Start with Hello Initiative. Sponsored by the School Counseling Department, the week served as a time to focus on garnering an inclusive environment between teachers, staff members and students alike.

As a part of the Sandy Hook Promise, a program that trains students and adults to recognize signs of gun violence, Start With Hello is a national initiative that aims to reduce states of isolation caused by COVID-19 as it can lead to negative thoughts. The week dedicated to the movement aimed at creating a more healthy and united school environment to generate a heightened sense of inclusivity and togetherness. The program believes that establishing such an environment in schools can go a long way to prevent negative incidents, such as that of gun violence, from happening in the future.

By participating in the project, counselors asked Midlo students and faculty to engage in a different challenge each day during the week, all of which centered around reaching out and connecting with their peers. Starting Monday, members of the Midlo community were encouraged to say “howdy”  to someone they didn’t know. Abiding by western hospitality, students were encouraged to reach out to new people. Making a point to go out of their way to start a conversation with others shows just how simple it is to create an inclusive setting where everyone feels acknowledged.

Next was Thankful Tuesday where students expressed what they are thankful for at Midlo. Following that, Wednesday’s challenge was to wear green and jeans to promote the program’s initiative of going the extra mile to extend a friendly hand to others. On Thursday, students signed their names on a Start with Hello banner located near the lobby where individuals came together to pledge their willingness to embrace everyone around them. Friday, students were encouraged to wear Midlo apparel, which highlighted a foundation of commonality between everyone in the school community.

“The whole experience was a great way to reach out to people that may be feeling left out,” sophomore Clara Huff said, illustrating the impact such an initiative has in regards to fostering an inclusive environment.

The Start with Hello initiative acted as a starting point for students to reach out to one another and create connections.  After a year spent in virtual and hybrid learning modules, the week provided a period of time for both students and staff to unite as one in order to establish healthy communication techniques and an uplifting social setting, both of which are vital components to a supportive community.