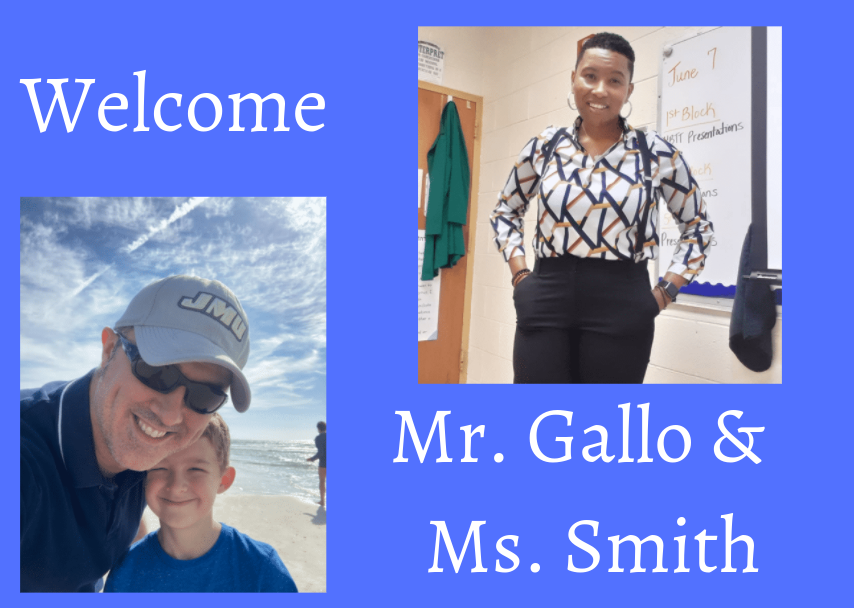 Midlothian High School welcomed two new Science teachers into the building for the 2021-22 school year. The new additions to the Midlo community include: Mr. Thomas Gallo and Ms. Keandra Smith.

Coming right from the US Department of Energy working on nuclear weapons and declassification, Mr. Thomas Gallo is now a new science teacher here at Midlothian High School.  After Gallo’s plans of helping declassify nuclear weaponry were suddenly dropped by the government, he wanted to make use of his physics degree elsewhere.

While he was offered the position of running the nuclear reactor of a US submarine, Gallo found the idea of spending time separated from his loved ones unbearable. Instead, he turned to the education industry where he found himself getting along better with kids rather than adults. That’s when he knew he was meant to be a teacher.

“There aren’t that many physics majors,” Gallo said.  “It’s a really powerful degree because they think you can do all this special stuff, and I guess I can, but teaching is more fun.”

In his free time, Gallo enjoys playing video games with his girlfriend and 9 year old son, such as Skyrim and Apex Legends. Being a drummer, he also likes to take time to teach his son how to play instruments. “I just want something that sort of gives back to you a little bit,” explains Gallo.

One fact that people find interesting about Gallo is that he cannot swim despite growing up on the water at Virginia Beach. “I just can’t understand the theory behind it. I just can’t make my body work that way,” Gallo said who is still unable to swim to this day.

One word of advice Gallo tells all his students is to “recognize your value in relationships” given that “if you recognize that you’re the greatest gift that you have to bring into any personal relationship, you will not let yourself be undervalued by other people.  There are 7 billion people in this world, and if the ones you spend time with just aren’t doing it for you, you can find new friends.”

Coming right from the culinary field of food analytics, Ms. Keandra Smith knows all about the science world.  Ms. Smith brings a new light into the world of biology.

“I was always wondering how things work,” Smith said, explaining her love for biology and science. “I even declared that in eighth grade that I was gonna be the one to cure cancer, but of course, I never did.”

Before she was a biology teacher, Smith spent her time in the lab taking scientific notes on food samples as a food analyst. “I enjoyed being a food analyst, but my mom is a teacher, and so, I was like, what if I could just take my love for science, and combine it with teaching?” Smith said.

Smith carried out her undergraduate at Hood College in Maryland.  “And no, it’s not in the hood,” Smith said.  Hood College is named after a woman who donated money towards establishing education for students. “So there’s nothing hood about it.” She then received her Masters from the University of The Rockies.

When Smith is able to snag a few hours of free time, she puts pen to paper and fulfills her passion of writing and poetry. “I like to write and do poetry and sometimes short stories when I have time,” Smith said. When she was in college, Smith published her own book and a selection of poems in a literary magazine where she received literary prizes.

“Poetry to me is just another way to communicate. There are different ways people communicate, like some people are more visual and some are just more words people,” Smith said.  She now takes her passion for science to the classroom where she hopes to inspire her students through Biology.