The debate over one-way hallways 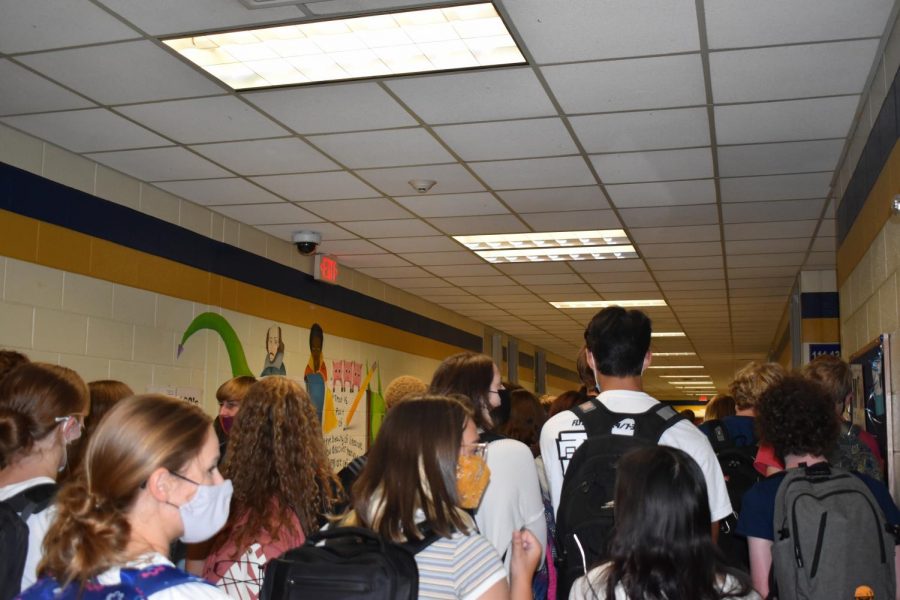 The time is 9:15 in the morning and the bell ending first-period rings. Within seconds, doors swing open and students flood the tightly packed hallways. Sophomore Kathryn Duvall finds herself racing to second period, zig-zagging through different hallways in order to follow the new one-way system that has been implemented in the four main hallways. The extra time it takes to walk the halls causes her to arrive late and be marked tardy by her teacher once again. Duvall, among a number of other students, is faced with the daily dilemma of either following the new traffic patterns and possibly arriving to class late, or going against the flow and arriving on time.

“They make the traffic worse and the hallways are still a standstill. I’m super late to my classes and I have to walk even further to get places, so it makes it worse,” Duvall said.  “There were only a third of people here last year, so it made sense, but now the whole school is back and now it makes everything more crowded. I think the solution here is just to give students some more time in between classes.”

Introduced during the 2020-2021 school year while students participated in hybrid learning, one-way hallways have been a hassle this year for students who attempt to navigate the hallways quickly. The intention behind them was to alleviate traffic jams in highly concentrated areas, as well as limit the potential spread of COVID-19 and close contact between students. But with nearly two thousand students in the building this year, the hallways are more packed than ever, and because the new system forces students to follow a specific direction in each hall, they find it can be quite difficult to get to class on time since direct routes are sometimes not an option.

“It just takes so much longer to get to my classes, so it’s just worse in my opinion,”  junior Ty Morgan said. “We already have COVID cases, and we still sit around each other at lunch with no mask.”

Although freshman and sophomores have not experienced the original hallway systems, they are still quick to point out flaws in the new flow of traffic. “I honestly hate it because I hate walking all the way around the hallways just to get to my class. It’s annoying because I’m walking in a “U” shape to get to my class. I’m not always late because of the hallways, but I would say at least three times a week I am,” freshman Karol Nachman said.

However, some students agree with the current system. “It doesn’t really bother me that much,” junior Zachary Bond said. “The hallways are still just as crowded. The only problem is if your class is on one side of the hall, and you have to walk all the way around.”

In response to student complaints, Dr. Abel decided to conduct an experiment and walk the halls himself during a class change.  Dr. Abel braved the crowds as he made his way from a math classroom at one end of the school to a science classroom on the opposite end.  During his test, he walked alongside a student, who in the test, cut through the hallways and walked opposite of traffic.  In the end, Dr. Abel found himself late to class, while the student who went against the one-way, made it on time.

“It makes the hallways just a bit slower, but at least we’re all walking the same way,” Abel said.  “I have no problem after the warning bell if students want to cut through the hallways.”

As the one-way hallways continue to be put into effect, students must find creative passages and quick routes to class. One-way hallways may be more effective in moving a mass of students from point A to point B safely, but it may not represent the most timely solution in light of an increase in class sizes on top of a return to full capacity.  In a poll, we found that of 140 random students, 26 voted in favor of the hallways, while the other 114 voted against.