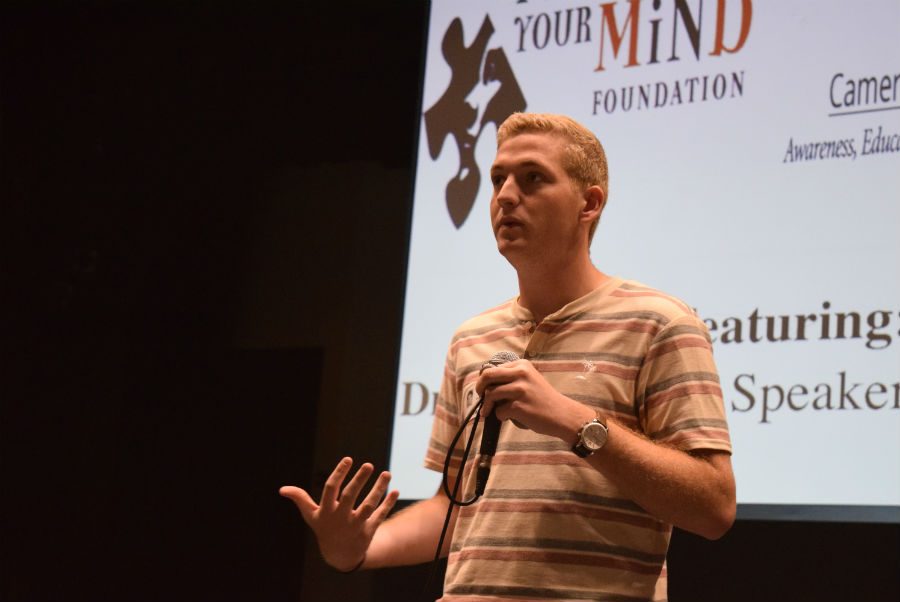 On September 27th, 2016, Drew Bergman, a Minding your Mind speaker sponsored by the Cameron Gallagher Foundation and the Midlo PTSO, came to the humble halls of Midlo to provide an assembly about the importance of mental health. To begin his inspiring presentation, he discussed the intense background of his family. Bergman put on a brave face for Midlo, as he elaborated on how his family’s preppy image did not match what happened inside the walls in his house. Alcoholism tragically consumed his parents’ relationship for years without his knowledge. In 7th grade, his mother filed for divorce from his father after he narrowly missed a drunk driving accident while his daughter sat in the passenger seat.

The pressure of the divorce proved too much for young Bergman, who began to fall into a serious case of depression. Bergman’s melancholy led him to his first suicide attempt at the young age of twelve, while still a seventh grade student. In addition, the effects of his parents’ broken relationship not only affected him, but also impacted his siblings, sparking serious mental and physical illness in the form of anorexia, bulimia, depression, and drug use. Four years later, anxiety and depression once again consumed Bergman and unfortunately led him to his second suicide attempt as a sophomore in high school. During the presentation, topics that commonly affect students worldwide, such as self-harm, depression, and suicide, created a rippling effect on the audience, who immediately understood the gravity of the event.

After Bergman finished talking about the impact of mental illness on his life, he offered great detail about his long process to recovery. His school guidance counselor provided a lifeline for him by proving to him the importance of becoming physically and mentally healthy again. By the time he entered his junior year in high school, he began to show significant improvement, even leading him to speak to his student body about his ordeal, which served as a source of great relief to him, as he no longer had to hide. This admission verified to Midlo’s students the presence of light at the end of a tunnel, no matter how long and dark it may seem. He recommended that each student find 1-3 adults to whom they can turn for advice and adopt 3 coping mechanisms, such as exercise, music, yoga, etc., to relieve stress.  Freshman Audrey Longstaff says, “It was a sensitive topic, but Bergman was a fantastic speaker, and I’m very glad I got to attend the assembly.”

A stand-out moment for the audience came after he instructed the students to imagine themselves looking through a straw, which presented students with a clear illustration of how mental illness prevents people from seeing the bigger picture. Junior Rebekah Adams said the assembly gave her a “different perspective on mental health,” and she gained a “greater appreciation for the people throughout the school.”

Bergman painted another powerful picture of every student carrying an invisible backpack to school every day. For some, that backpack could consistently overflow with the struggles and grievances of teenage life, but for others, it could feel as light as a feather.  He shared with the audience how his experience taught him not to judge others because everything is not always as it seems. The subject of mental health is a very sensitive topic for many people; however, hearing from Drew Bergman really gave Midlo students a new perspective to consider and an avenue to seek help.