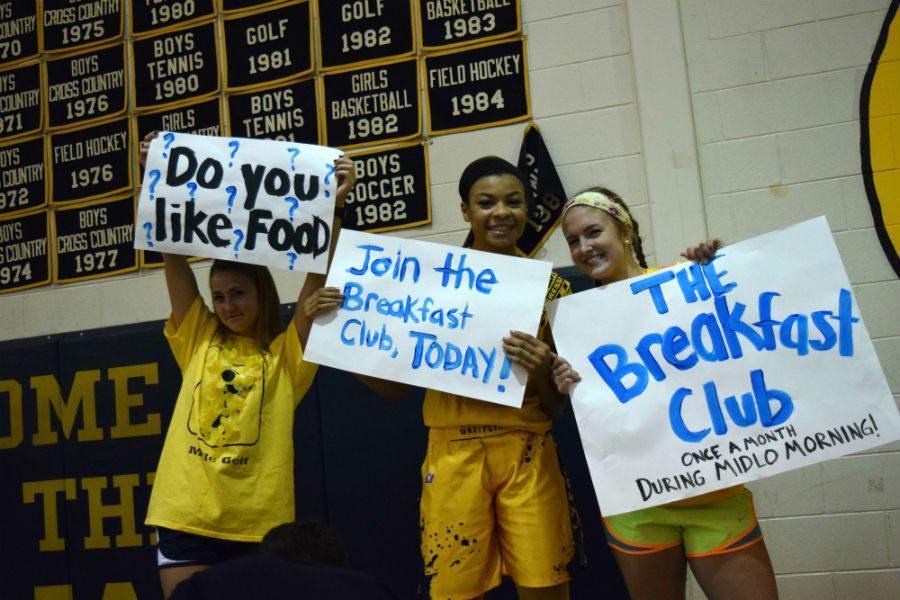 The Breakfast Club members pose with their signs to convince other people to join the club.

Midlo’s Freshmen Class could not have prepared for the high level of energy displayed during the Midlothian High School Club Fair on September 9th. What were they expecting: boring posters held up by unenthusiastic club recruiters? Five, seven, or maybe even ten clubs? Think again Freshmen, because the Midlo High Club Fair defies all preconceptions.

As soon as the students entered the auxillary gym, they found themselves immediately captivated by all of the different possibilties in front of them. They saw row after row of booths advertising all the clubs Midlothian has to offer. The swarm of new students walked around the gym and looked for something that might catch their eye.

Some clubs that stood out the most were: the Latin Club, Breakfast Club, Drama Club, and Book Club.  Latin Club recruiters wore togas, alongside Greek colomns, to add some pizzazz to their table. In addition, The Breakfast Club offered donuts, while cheering loudly in order to intrigue the potentially interested students. At the Theater Club table, Senior Eddie Thomas dressed up as a white unicorn to show off how much fun his club has together while doing what they love. Moreover, The Book Club let students vote on whether they wanted to read Throne of Glass by Sarah J. Maas or The Eye of Minds by James Dashner at their first meeting. Recruiter for Trojans for Tomorrow, Sophomore Lauren Hensley successfully used her powerful spirit to her advantage because a large number of new members joined. Freshman baseball player Matthew McRaney exclaims,”The moxie and determination of the recruiters convinced me to join a lot of clubs!”

The Club Fair left the pleasantly surprised freshmen thrilled to join all sorts of new clubs and for the opportunity to meet new people. An exciting new year has just begun.