A time-honored tradition returns to Starbucks 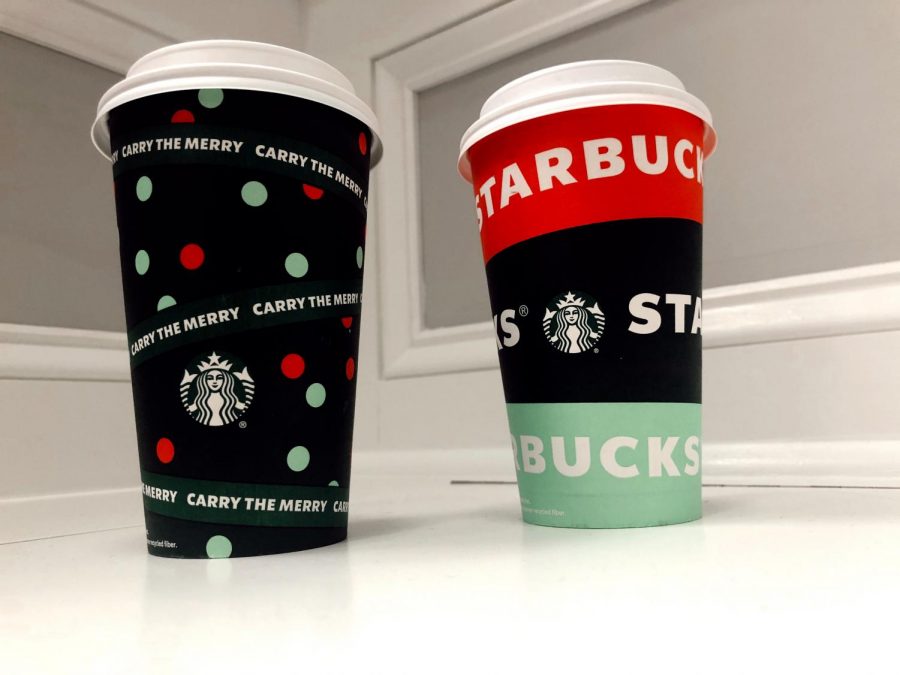 The Dots and Brand Wrap, two out of four of Starbucks's featured 2020 holiday cup designs, make their way into eagerly awaiting public hands.

With each season comes recurring traditions that take on many forms for every individual. Although this holiday season may look and feel quite different from previous years, one can find an overwhelming sense of familiarity in the simple, yet timeless, staple of the Starbucks annual holiday cups, marking the unofficial start of the holiday season for coffee enthusiasts around the world. Remaining a popular feature of the joyous season, the company, initially established in 1971, released this year’s set of cups, four in total, on November 6, 2020, producing a bright light in even the darkest of times, as the Covid-19 pandemic continues to bring a number of uncertainties to the public.

Over the years, Starbucks has transcended the notion of a typical café, turning into a daily ritual for countless individuals who frequent the convenient chain. The global franchise has earned approximately $28.2 billion so far in 2020, according to Forbes magazine, which stems over thirty thousand locations as of 2019, including the new addition to the Winterfield Crossings Shopping Center, only 1.3 miles from Midlothian High School. To keep up with its growing rate of consumerism, the widely popular establishment first introduced the idea of seasonal-themed cups in the year 1997 as an easy way to further entice customers, while also building excitement for the holidays. Year after year, the various designs found on the cups have evolved, yet they always incorporate elaborate themes with a corresponding story behind them.

For the 2020 freshly brewed batch of holiday cups, each one focuses on the theme “Carry the Merry,” inviting customers to enjoy the things in life that bring them jubilation. “Our thought behind the cups was about people carrying them out in the world as messengers of joy,” said Jeff Wilkinson, creative director for Starbucks. “In a way that message deepened as we got further and further into this year. We want to be that beacon for people, a brief moment that they can look forward to.” After much planning, the team of designers settled on four designs: Ribbon, Dot, Sparkle, and Brand Wrap, with two of the cups featuring the slogan “Carry the Merry,” summing up the chain’s mission for this holiday season. However, not every cup style has received praise from consumers throughout the years, notably the infamous red cups in 2015 that stirred up a highly debated controversy in the media. The two-toned color scheme came under fire by critics who viewed the company as “waging war on Christmas,” creating backlash that Starbucks has since then corrected.

In correspondence with each of the seasons, Starbucks also updates their vast menu, bringing customers seasonal beverages, food items, and an array of merchandise. Fan favorite drinks, including the esteemed Peppermint Mocha, Toasted White Chocolate Mocha, Caramel Brulee Latte, Chestnut Praline Latte, and Eggnog Latte, made their way back to satisfy taste buds, along with returning tasty treats, such as the Cranberry Orange Scone, Sugar Plum Danish, Cranberry Bliss Bar, Snowman Cookie, and Snowman Cake Pop. Celebrating the turn of the season, Starbucks celebrated on November 6 by gifting customers a free reusable holiday cup to those who purchased one of the many holiday beverages while supplies lasted at participating locations, which went quickly, as the highly anticipated event consisted of individuals staking their spot in line prior to the store’s opening to ensure a chance to grab the collectible item. Over the remainder of the season, guests can also get their hands on cold cups, tumblers, themed gift cards, and pre-packaged seasonal flavors, perfect for stocking stuffers.

When traveling to a local Starbucks to either order an annual holiday cup or one of the many seasonal items offered, the chain works hard to uphold all necessary protocols to ensure a safe experience for all guests. During the entirety of the pandemic, the coffeehouse company has kept up with standards set in place by the Center of Disease Control and Prevention (CDC), requiring both workers and guests to wear masks at all times, as well as conducting regular cleaning and sanitation routines. By also allotting guests the ability to carry out a contact-free payment method, Starbucks further generates a worry-free environment for all.

With the signature holiday cups available until the end of the season, Starbucks undoubtedly succeeds in spreading cheer to customers safely around the world, despite the hardships still lingering within society.