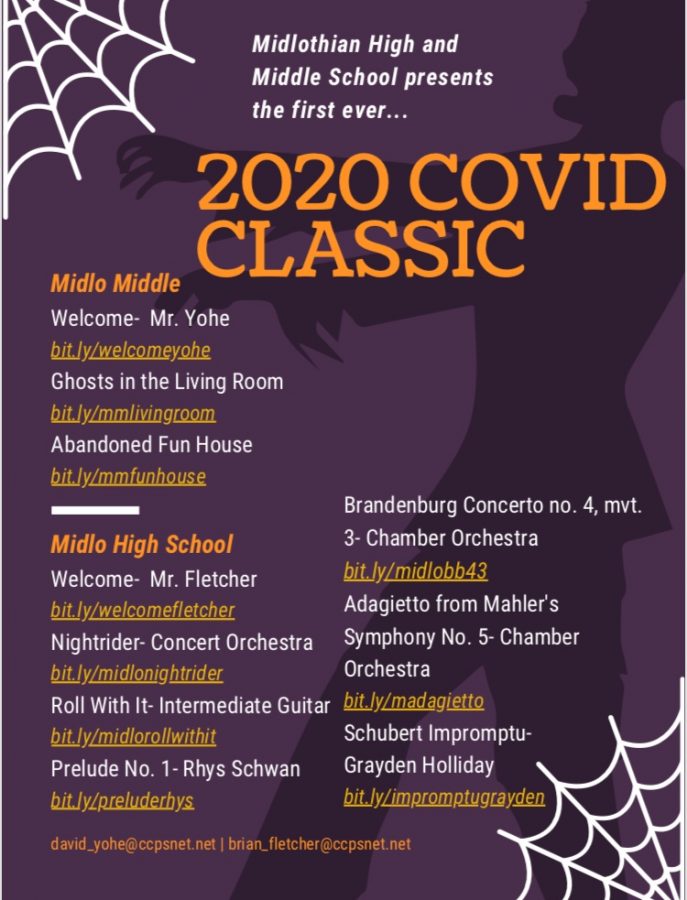 This fall, the Midlothian High School Orchestra collaborated with the Midlothian Middle School Orchestra to create the first-ever COVID Classics Concert. Midlothian High School’s Orchestra and Guitar Director, Mr. Taylor Fletcher, and Midlothian Middle School’s Orchestra Director, Mr. David Yohe, worked with around 95 students to share their love of music with the community in a virtual concert. Due to the pandemic, the groups couldn’t safely gather to play, so they elected to use WeVideo, merging various recordings to construct an orchestral masterpiece. Students spent hours perfecting their pieces and dressing in concert uniforms or Halloween costumes to film.

Before the school year began, Fletcher and Yohe prepared for this concert by familiarizing themselves with the challenging software. Mr. Yohe shares his experience in creating the concert by remarking how he “work[ed] hard all summer trying to figure out how to make the virtual concert using WeVideo and Soundtrap. The students recorded their parts into Soundtrap, then [he] made an mp3, and then the kids played along with the recording. [He] muted the video track and used the recorded track.” Throughout the first marking period, the two orchestra directors spent over 25 hours editing the production. Mr. Fletcher comments, “We started working on the music on the first day of school. Editing the video[s] took me about 8-9 hours.” Both teachers tirelessly persevered through the novel challenges of submission errors and failing internet connectivity. Students also experienced many new difficulties with recording, such as family interruptions and unintentional background noise.

In the virtual concert, Midlothian Middle School played two Halloween-themed songs, Ghosts in the Living Room and Abandoned Fun House, while Midlothian High School’s Concert Orchestra delighted all with Nightrider by Richard Meyer. Midlo’s Intermediate Guitar group performed Roll With It. Additionally, Rhys Schwan performed a solo on the guitar of Prelude No. 1 by Hector Villa-Lobos. Brandenburg Concerto No. 4, mvt. 3, by J.S. Bach in 1720, was played by Midlo’s Chamber Orchestra. Grayden Holliday also performed a solo on the piano, Impromptu No. 2 in E Major by Franz Schubert.

Chamber Orchestra violinist Ryah Doll shared, “I was surprised and impressed at how well it turned out.” The two musical groups plan to hold another online concert during the holiday season. The COVID Classic has prepared both teachers and students of the two schools for a more extravagant winter concert. “The concert went well. It was definitely a first try [for us], and we hope to improve upon what we made, but it was important for us to do it and to get used to the process so that we can make the next one bigger and better,” Fletcher reflected.