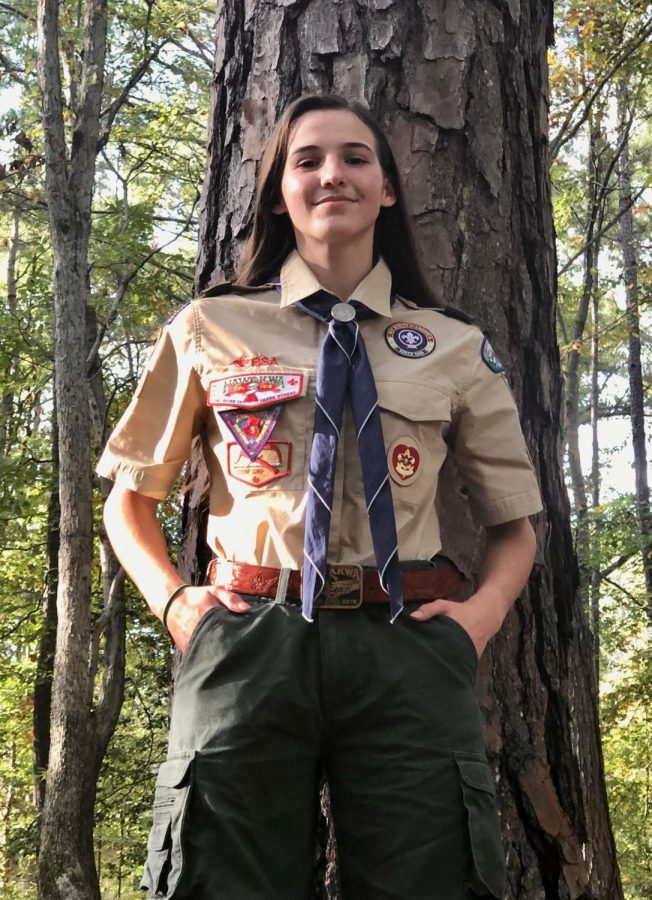 For senior Emelia Delaporte, new places offer opportunities for personal growth; in her lifetime, she has lived in six different locations, each pushing her to explore new interests and develop in a multitude of ways. Growing up, Delaporte participated in Girl Scouts of the United States and American Heritage Girls, which began the formation of the bond for her love of the community and camaraderie that scouting has to offer. In eighth grade, Delaporte attended a summer camp in Grand Teton National Park that confirmed her passion for backpacking and furthered her dream of joining the Boy Scouts of America, which focuses on outdoor survival skills, hiking trips, and deep-rooted connections among troop members.

On February 1, 2019, the Boy Scouts of America transitioned to Scouts BSA and began allowing females to join troops. Immediately, Delaporte jumped at the opportunity, and over the course of the past year and a half, she has amassed merit badges and lifelong memories to accompany them. In early December, she expects to earn her Eagle Scout rank, needing merely two merit badges to achieve this goal. In August, Delaporte completed her Eagle Scout Project by building benches in the Overton Grove section of the Midlothian High School student parking lot “because throughout all six schools that [she has] attended, band has been the only consistent thing. The benches will serve as a place for Midlo’s Marching Band to rest between practices without risking sunburn or getting dirty,” she explained, happy to “make a small impact on the organization that has always been there for [her].”

Throughout her time in Scouts BSA, Delaporte has completed monthly camping trips, practical skill trainings, and team-bonding activities with her troop, Troop #542. For legal purposes, her 25-person troop is only comprised of females, but they participate in most projects with Troop #544, an all-male troop. Her most treasured skill, her ability to backpack and survive in nature, frees her by “providing an escape that [she doesn’t] have to think about.” She describes that backpacking and hiking “wipe [her] brain and make [her] live completely in the moment.”

Despite the enormous strides that the Boy Scouts of America has taken, Delaporte “fully expects” the organization to integrate males and females into unisex troops within fifteen years. “The fact that they already allowed girls to join Scouts BSA is a humongous step. Scouts will soon follow Venturing because if they are allowing girls to join Scouts, I don’t see a reason why they can’t integrate like Venturing.” Venturing, a unisex youth program within the Boy Scouts of America organization, has already made groundbreaking strides in gender inclusion.

As she approaches her Eagle Scout rank, Delaporte reflects that her “favorite thing about Scouts is being able to walk up and tell people that [she] is a Boy Scout; they are always so shocked!” She adds, “The whole organization is like a family. The people that I’ve met from around the country are so amazing and form such strong connections.” As an adult, Delaporte plans to spend her recreation time volunteering in state and national parks and leading as a Scoutmaster, allowing her to continue her journey with Scouts BSA.