Sports spring into the new season 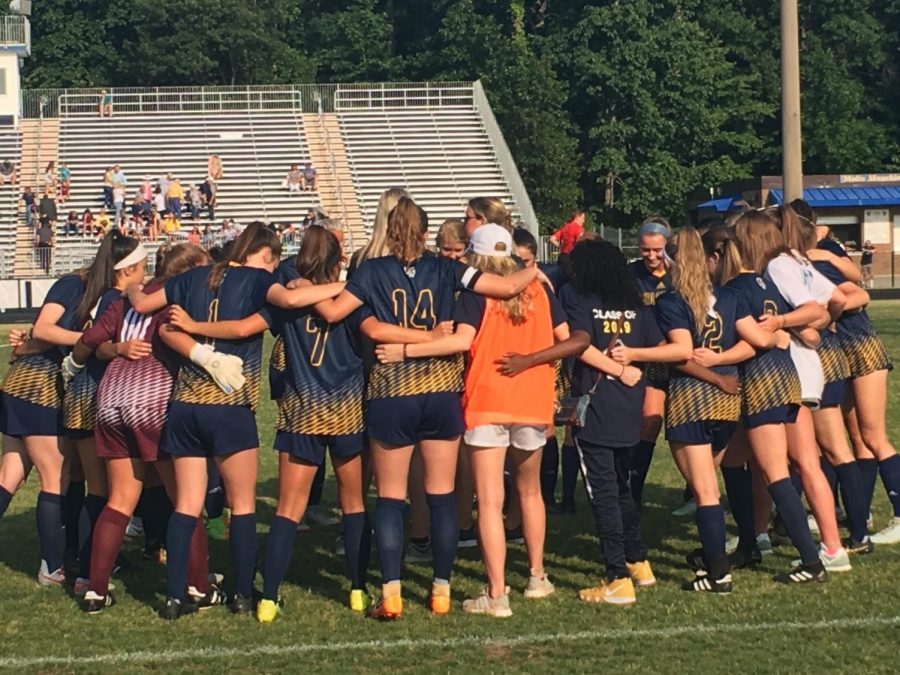 Spring sports gear up for a new season of competition, with hopes to make it to States.

Girls Soccer – After a successful 2019 season, making it to the State Tournament Semi-Finals, the Midlothian Girls’ Soccer team hopes to build on this momentum leading into the springtime. With the loss of eight seniors last year, including goal scorer Logan Georgel, the Lady Trojans look to veteran players and newcomers to continue the forward progress. The Trojans will count on Zoe Long, Erin Junkmann, and Sarah Aud, who have played varsity all four years, to lead the Trojans this season. Also, the Trojans hope that younger players, Layla Shell, Lauren Zevnik, and Jake McGuire, will bring youthful energy to the field. Senior Claire Mosher shares, “I hope to have a great senior season and to make it back to States this year.” The Lady Trojans will open their season on Friday, March 6, away at Landstown High School.

Boys Soccer – While facing a heartbreaking loss to rival Monacan Chiefs in the Region Semifinals, the Trojans hope to bounce back this season, with new players expected to make an impact. Although losing strong players, Bogue Cummings, Carter Averette, and Davis West, seniors Kodie Tannor and Kyle Gaunt will lead the charge, as the Trojans back line, with Justin Varela and Graham Wright as anchors, will play a key factor in keeping the team afloat.  Sophomore standout Chase Brown shares, “This season we have a really strong team because of a lot of newcomers who will elevate the level.”  The Boys Soccer team opens the season on March 5, away at Meadowbrook High School.

Girls Lacrosse – With the introduction of Coach Rebecca Lowe and the loss of goalie Bryce Naimen, along with four senior leaders, including: 2019 Captain Marguex Richie, Midlo looks to yet another fresh rebuilding season. Since early January, the team has been hard at work, weight training and developing stick skills. This season, the team will look towards seasoned returners, including: junior Riley Martin and sophomore Hayden Strausburg to lead the team into the challenging schedule. The official season will take off with the first game taking place away at Matoaca High School on March 16.

Boys Lacrosse – Coach Greg Barnard returns to lead Midlo Varsity Lacrosse in the 2020 season. After reaching the State Quarterfinals in the 2019 season, the team sets its hopes high, using their success to fuel them for the upcoming season. Junior Jeffrey Klaiber states, “The goal this year is States.” After losing key player Bryson Miller, the team will look towards seniors Paul Miller, Derek Christmas, Zach Harriman, and goalie Oz Potter to lead the team to yet another winning season. Their first home game takes place at their home field on March 18th against Lee Davis.

Softball – With a coaching change, Coach Adam Layton will lead the Varsity Softball team this season. Coming off an 8-7 record in the 2019 season, the Lady Trojans will look to veteran players to lead the team to a winning season. After losing pitcher Abby White, Emily Morrison will lead the Lady Trojans in the circle.  With talented returning players, Ellie Herndon, Cassie Grizzard, and Abbie Campbell, the team has high hopes for this upcoming season. “I think with the incoming talent, we will have a strong season, and everyone will improve as a player” states senior pitcher Morrison. The Lady Trojans begin their journey on March 5th at Collegiate School.

Baseball – Under the direction of Coach Brad Chambers, baseball returns after a winning season ending in the States Quarterfinals. After losing key players Camdton Furman, Logan Smith, and Evan Heine, the team will look towards strong returners Christian Chambers, Carter Lovasz, and Alex Kyte. According to senior Hunter Beck, the team’s goal for the season is “to make it to States.” Their season will take off on March 17th, as they rival Glen Allen in a home game.

Girls Tennis – Midlothian Tennis returns in full swing under the direction of experienced coach, Ben Pomeroy. After weekly conditioning and skill sessions, tryouts take place throughout the week of February 24th, when the large turnout will cause each athlete to prove themselves for a spot on the roster. After losing key senior Ashley Peterson, the team will look towards captains Zoe Kopidis and Abbie Lynch to lead the team throughout the season. Senior captain Kopidis claims this season “is going to be a challenging season because we will face tougher schools, but I am confident we will practice hard and work to develop new skills as well as mental toughness.”  The first match will take place on March 24th against James River High School.

Boys Tennis – Entering her 2nd year Coach Ellick looks to veteran players to lead the fresh faces this season. After losing a strong player in Jack Williams, the team looks to Ben McCormack as the only senior to guide the Trojans to a successful year. Also, influential juniors, such as Jackson Wolworth, Jacob Truini, and Joey Keating, will assist McCormack in leading the team. Senior McCormack states that “this season will be great. I think we’ll have a strong team.” The Midlothian Boys’ Tennis team hosts their first match on March 5 against the Trinity Titans.

Outdoor Track –  After a successful year with a trip to the State Meet, the Trojans outdoor track team hopes to make it back another round, and potentially qualify for Nationals.  Although suffering the loss of Erin Babashak and Brayden Staib, the Trojans will look to seniors and juniors to help guide the team to another State finish.  Senior runner Annabel Shepcker believes “this season will be a strong season, and I think the momentum from winning Region indoors will carry into the outdoor season.”  The first meet of the 2020 outdoor season will be the Bryan Watkins Invitational.