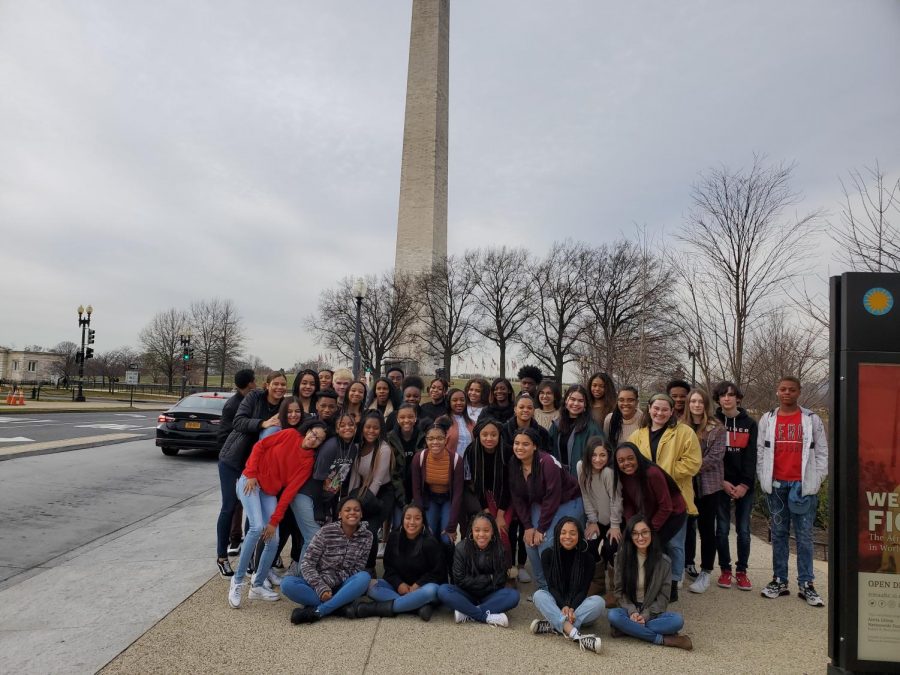 Breaking Down Barriers club stands in front of the US Capital.

A relatively recent Smithsonian addition, the museum not only holds photos, paintings, and sculptures produced by African American artists, but offers a wide array of musical, athletic, film, and theatrical memorabilia contributed by the nation’s most influential figures. At its unveiling, Barack Obama spoke to the thousands of citizens who attended, proclaiming, “This national museum helps to tell a richer and fuller story of who we are. It helps us better understand the lives, yes of the president, but also the slave; the industrialist but also the porter; the keeper of the status quo but also the activist seeking to overthrow that status quo; the teacher or the cook alongside the statesmen. And by knowing this other story, we better understand ourselves and each other.” Since its opening, the NMAAHS has attracted continuous acclaim, with multiple politicians, celebrities, historians, and artists visiting the epicenter of African-American culture from around the world. The resonance it strikes with all people, not solely African-Americans, about the obstacles and hardships African-Americans have had to overcome, while simultaneously stimulating nearly every facet of the artistic landscape, demonstrates that sometimes the most influential works are produced from times of extreme adversity.

With this reputation, the Breaking Down Barriers club considered the spot an important place to visit. Fariza Kareem, Breaking Down Barrier’s President, commented on why the location was chosen, saying, “We wanted to go to the museum because we wanted this to be an open opportunity for students to really experience the national African-American history museum and see what it has to offer. The museum provides extremely detailed insight into what African-Americans went through, from when they first came to America as slaves to civil rights movements throughout history. Additionally, as February is Black History Month, we thought it was appropriate and an opportunity to deepen the experience of exploring African-American accomplishments.” Emma Rice, Vice President of BDB, added, “The museum was super well donem, and I’m glad I got to really delve into that vast history. We don’t learn a whole lot about that timeline in school, the murky parts where America could be seen as evil or dehumanizing, so I really enjoyed that at the NMAAHS, the veil of “Manifest Destiny” was removed to reveal the hardships African-Americans have been dealt.”

Starting in 2017, Breaking Down Barriers was created, in Kareem’s words, “To promote inclusivity, diversity, and equity throughout the school and community. Our goal is to change the ways and attitudes of how things are viewed to minimize bias and unnecessary tension. Being President of this club has been really great, as I get to work directly with [the] administration on organizing things that could be really impactful for the school and its students.” The club aims to plan more trips in the future revolving around the culture and perceptions of minorities, hoping that with more investigation and communication, a sense of understanding will grow from all races, genders, and religions.