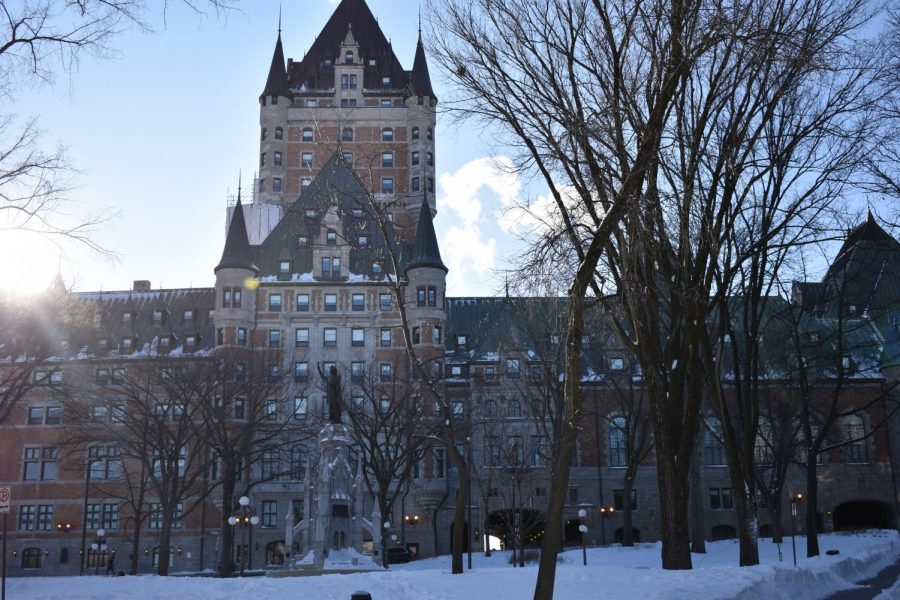 Early morning on February 13, 2020, twelve Midlothian High School French students, including: junior Luke Browning, junior Emily Gundel, junior Olivia Adams, junior Jubilee Whitmer, junior Jane Ostoich, sophomore Matthew Son, sophomore Scarlett Schepker, sophomore Will O’Halloran, sophomore Tara Farmsworth, sophomore Henry Moraski, sophomore London Matthias-Booth, and sophomore Julia Schmidt, accompanied by Mme. Catherine Mazzola and Mme. Hannah Foster, as well as four parent chaperones, embarked on a journey to Quebec, Canada. They boarded a bus and traveled to Washington D.C.’s Reagan National Airport, where they waited eight hours for their delayed flight. When they finally landed in Montreal, Canada, the group took a 3 hour bus ride to their destination, Quebec. Tired and sore from the many obstacles thrown at them during their travel, the group finally made it to their hotel to get a good night’s rest before the next day’s activities.

Waking up bright and early once again, the students followed their guide, as they began their walking tour of the Old City of Quebec. Quebec City is divided into two parts: Modern Quebec, which has the shopping malls, big skyscrapers, and bustling cars, and Old Quebec, separated from the rest of the city by a wall surrounding it, known for its artisan architecture and beautiful scenery. During their walking tour, they visited the famous luxury hotel, the Fairmont Le Chateau Frontenac, and a small Roman Catholic church, La Notre-Dame-des-Victoires. Despite the cold, bitter wind, the group enjoyed the beautiful streets of Old Quebec. Following the tour, the group took a ferry across the frozen St. Lawrence River, where they enjoyed hot chocolate and the only bit of warmth for the rest of the day. Afterwards, they ate a hearty lunch at Sugar Shack, where they learned how to play the traditional Canadian musical instrument, the spoon, and experienced a traditional Canadian dance. Then, the group headed to the dog sledding track, where they took a scenic route in the sleds and played with the puppies in the dog nursery afterwards. Following the dog sledding, the group went back to Sugar Shack to watch a presentation on how to make maple syrup. Later that evening, the group enjoyed some leisure time at the annual Winter Carnival, spending time with the official representative of the winter carnival, La Bonhomme.

As Saturday morning rolled around, the students met to eat a sausage and pancake-filled breakfast at the hotel before heading to the Plains of Abraham for an interactive history lesson of the 1759 Battle of Quebec, under the direction of French General Louis-Joseph de Montcalm and General James Wolfe. The students learned how to load a rifle, prepare a cartridge, load a cannon, and even how to amputate a leg. After the exciting and humorous presentation, the group enjoyed a breathtaking view of the Parc de la Chute Montmorency falls, taller than Niagara Falls. Afterwards, they visited the Copper Museum to learn the history of Repoussé art and make some copper artwork of their own. Next, the group visited Basilique Sainte-Anne-de-Beaupré, where the famous copper artist Albert Gilles designed and built the copper doors, a feat that took him 12 months to build himself.

Before heading to the airport Sunday morning, the group enjoyed a traditional Parisian breakfast at Le Cochon Dinque, where the students ate an interesting creation of croissants and hot chocolate in a bowl. Finally, they returned to Montreal, where they visited the Montreal underground city and shopping mall. Later, they took a scenic walk up the Mont Royal Belvedere Mountain, named after the first nation’s chief, who contributed to the signing of the Peace Treaty in 1701.

After a fun-filled trip, the group headed back to the airport saying, “Au Revoir” to their guide and boarding their plane to head home.