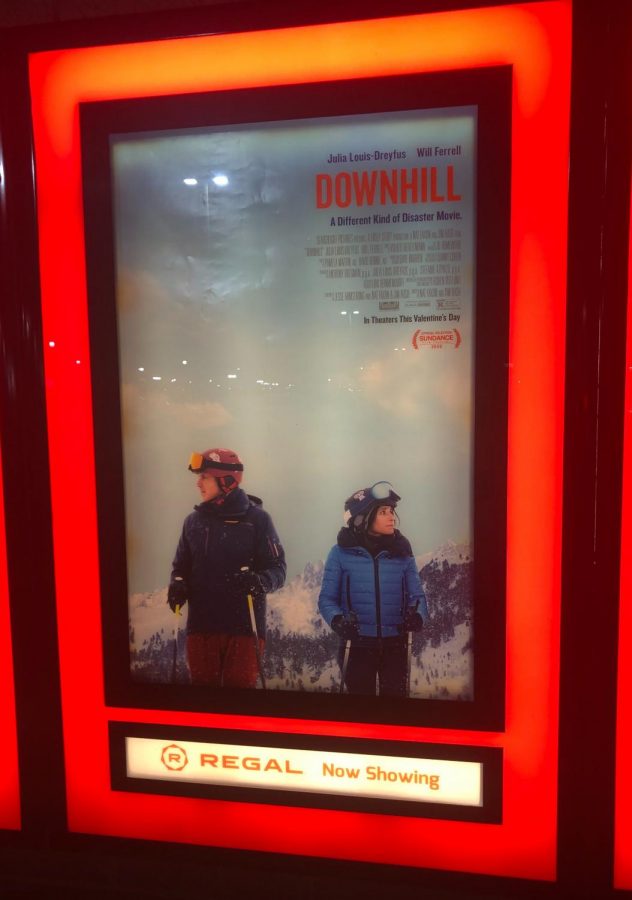 The newest adaptation of Downhill causes audience to long for the original.

Based upon Force Majeure, a classic Swedish comedy released in 2014, the new cinematic feature Downhill made its world premiere at the Sundance Film Festival on January 24, 2020, but did not reach theaters until February 14. Renowned actor Will Ferrell, who plays Pete, stars alongside actress Julia Louis-Dreyfus as Billie in the new adaptation to restore the tale that audiences once loved. Although the cast lineup promises above-and-beyond work, viewers near and far find themselves unsure of the movie’s content. The plot’s weakly strung together layout undermines the true humorous tone of the movie about toxic masculinity battling female superiority.

The story revolves around an American family of four taking part in a luxurious ski trip to the breathtaking mountains of Austria. Mirroring the Swedish film, Downhill puts the family through a life-altering traumatic event. In light of a “controlled avalanche” set off by the resort, Pete and Billie’s relationship destabilizes due to Pete’s inability to protect his family that ignorantly awaits in an outdoor restaurant. Instead of rushing to their aid, he grabs his phone and flees the scene in a state of pure panic, leaving his two sons and wife shaking. These raw moments act as the catalyst to the family’s internal issues that unfold later in the plot. Pete’s character flaws surface, sparking a seemingly never-ending family feud  that plays out on screen, however, not as swiftly as director Nat Faxon might have hoped. By staying so in-tune with the original plot, Faxon fails to revive the anticipated comedic elements, causing audiences to lose touch early in the film.

Given both Ferrell’s and Louis-Dreyfus’ history in the world of comedy, the film does indeed meet some moments of lightheartedness that successfully get the audience laughing. Yet for the movie’s majority, the tension between the two leading characters comes across as awkward to those who view it. The onscreen banter neglects to meet the humor of the original, causing the film’s underlying significant impact to fall short. Throughout the remainder of the movie, the parents try to comically play out their differing views of what they feel happened during the avalanche, but the script deprives the characters of the ability to fulfill their intended duty. Lengthy monologues from both sides force the story drag on without a resolution in sight.

Even though the comedic element may have misfired, the film’s creators manage to recreate well-known scenes from the original. With the iconic double-mirror scene encapsulating the two sides of the parental feud, fans will find themselves pleased by the familiarity. Not to mention, wholesome family moments beautifully play out amidst the chaos, giving way to valuable lessons, as Pete realizes the value of family and the importance of trust, both in his own instincts and with his partner. Though the movie’s narrative may appear rough around the edges, it undoubtedly encapsulates a heartwarming story of two individuals rekindling a hindered bond.