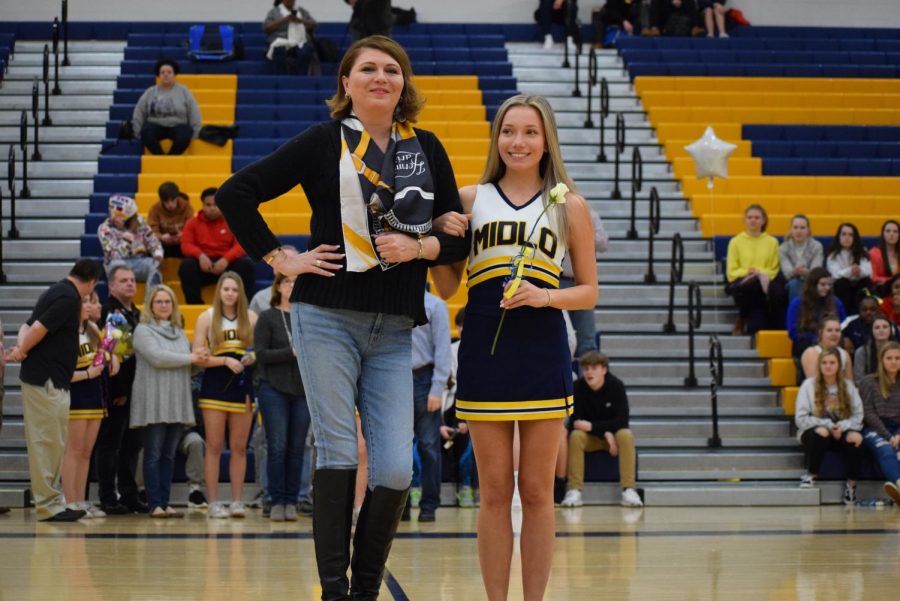 In the first game of the double header, the ladies hosted the Lady Bulldogs, and started with a bang, as Katie Gaeth earned the first point of the contest.  With a senior-heavy lineup, the Trojans attacked, winning key steals and converting them into baskets. The Lady Trojans defeated the Bulldogs by a score of 51-20 in the last home game of the regular season. After the Lady Trojans’ victory, the boys’ team hoped to carry the momentum into their match against George Wythe. After a rapid start, the Trojans led the Bulldogs 23-22 going into halftime, energizing the student section. The game remained a close match, but ultimately, the Bulldogs pulled away with a win, 49-42.

#5 Katie Gaeth – Gaeth has played for the Trojan Basketball program for all four years at Midlothian, playing three years on Varsity and serving as a captain for two. Gaeth will continue her academic and basketball career next year at Bridgewater College.

#10 Katrina Kirby – Kirby has played for the Trojan Basketball team all four years, with the last three on Varsity. After graduation, Kirby plans to attend a four-year university to study Business or Law.

#21 Zoe Long – Long has played basketball for Midlo for two out of her four years as a Trojan, sophomore year on JV and senior year on Varsity. Next fall, Long plans to attend Randolph-Macon College to continue her academic and soccer careers while majoring in Criminology.

#22 Dominique Douglas – Douglas has been a part of the Midlothian Basketball community for three seasons, the last two on Varsity.  After departing Midlo, Douglas plans to attend a four-year university to study Criminal Justice.

#23 Thomas Rose – Rose has played Trojan Basketball for 2 years and served as a captain during the 2019-2020 season.  After graduating Midlo, he plans to study at a four-year university.

#3 Keysean Key – This season has been Key’s first year playing basketball for Midlothian.  Next fall, he plans to attend Virginia State University and major in Accounting.

#35 James Oliver – Oliver has played Trojan Basketball for two years and served as a captain this season.  After departing from Midlo, Oliver plans to study Biology at Christopher Newport University.

#11 Ashton Philipp – Philipp has played basketball for the Trojans all four years of high school, with the last two on Varsity.  After high school, Philipp plans to attend Liberty University and major in Personal Finance.

Abigail Graves – Graves has managed the Trojan Basketball team for three years.  Once graduating from Midlo, Graves plans to attend JMU in order to study criminology.

Allie Cowardin – Cowardin has been a member of Midlothian’s cheer team for one year, after spending three years at Clover Hill.  After graduation, Cowardin will attend Longwood University to study Kinesiology.

Rachel Damico – Damico has been a Midlothian cheerleader for all four years of high school.  After leaving Midlo, Damico will attend Virginia Tech in order to major in Biology with a minor in Music Performance.

Caroline Leach – Leach has cheered for Midlothian all four years of high school, with two years on Varsity. Next fall, Leach will attend JMU to study Business.

Nicole Suddreth – Suddreth has cheered for the Trojans for three out of her four years.  In the fall, Suddreth will attend Christopher Newport University and major in Biology.

Gigi Valerio – Valerio has cheered at Midlothian for four years, with three on Varsity. After graduation, Valerio will attend Christopher Newport University to major in Business.