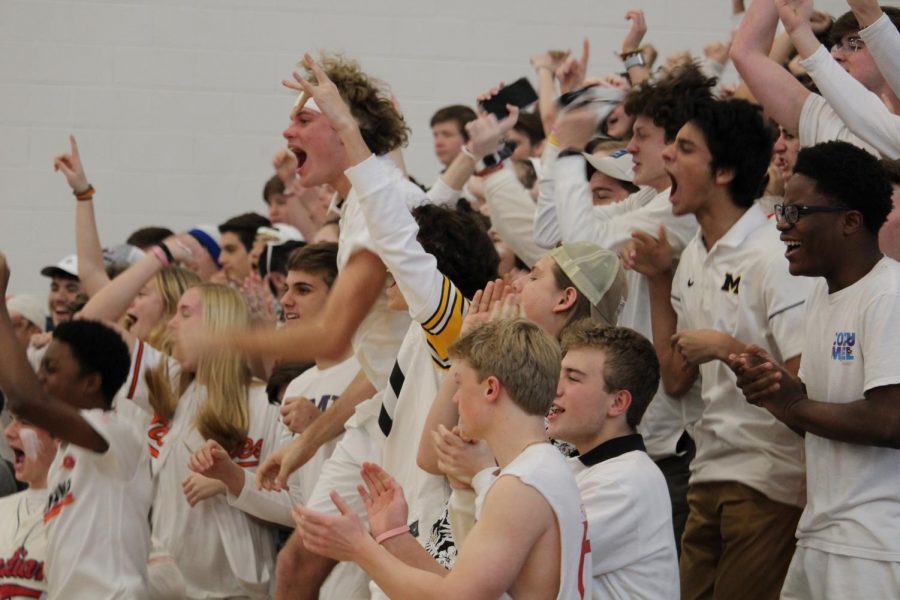 On Friday, January 24, 2020, Midlo’s most spirited students stormed into the gym for another one of Midlothian High School’s  iconic pep rallies, the annual 2020 Winter Pep Rally. The freshmen streamed in, resembling a sea of blue due to their large class size and colorful outfits. The sophomores came out to win in a bold black, while the juniors made a statement in all white. The seniors stormed the crowd in raging red, despite their small turn-out of roughly 40 students in attendance. Midlo students awaited this moment with immense anticipation since the start of the day, prepared to battle for the spirit stick and the title of victory over the other classes. Although most years the Winter Pep Rally is the most anticipated by the students due to the class dance portion of the event, this year, this competition will take place at the Spring Pep Rally. Despite the loss of this Midlo favorite, many students still came out to support their school in this exciting event.

To kick off this highly energized event, the students watched as the winter sports teams took the gym floor for recognition, storming the court and running towards their classes, accompanied by a stream of cheers and chants in support of their athletic dedication. Senior basketball players, James Oliver, Ben Scott, Carson Parish, Ashton Phillip, and Thomas Rose, tore through the court with pure pep, as they received recognition from the entire school on the Midlothian High School basketball court one final time, prepared for their game against the Powhatan Chiefs later that night. Next up, the Trojan Medford Basketball team entered the court, causing the classes to erupt in cheers for support of the team they have spent numerous lunches watching and cheering on. Next up, Girls Basketball, Boys and Girls Swimming, Varsity and JV Wrestling, and Boys and Girls Indoor Track received cheers from their peers and fans, ready to begin another awesome pep rally.

Following the winter sports, the Midlo cheerleaders performed their traditional pep rally cheer, hyping up the student sections to get loud and show their spirit. Fierce games of tug of war started the class battles, initiating the rivalries between the individual classes. First, freshmen and juniors battled against each other, and after an intense match, the juniors took the first win. Next, the seniors and sophomores faced off. The seniors held their own for the first half but then started to give out, allowing the sophomores to claim the victory. Then, after a fight for first place between the juniors and sophomores, the juniors emerged victorious. Next, each class prepared for the Hungry Hippos game, a Midlo favorite, which involved classmates pushing a partner across the floor on a scooter and gathering as many balls as possible. The classes then competed in musical chairs, a memorable game from the previous year, and the juniors again claimed the victory, amping them up through the numerous points gained from their victories. Sophomore Crew Gregory claimed second place in this event, and Makhi Jackson achieved third for the freshmen.

The pep rally concluded with the victory cheer, featuring another junior win. After a dominant pep rally showing, no one was surprised when the juniors placed 1st in the 2020 Winter Pep Rally, followed by the sophomores in 2nd, freshmen in 3rd, and 4th, seniors. Upon the announcement of their winning title, the juniors rushed the courts with excitement and spirit, taking the spirit stick home for their first pep rally victory of 2020. Junior Lauren Deaver shares, “The pep rally was really great, especially since we have never won before.”