Trojans rival the Rapids on the court 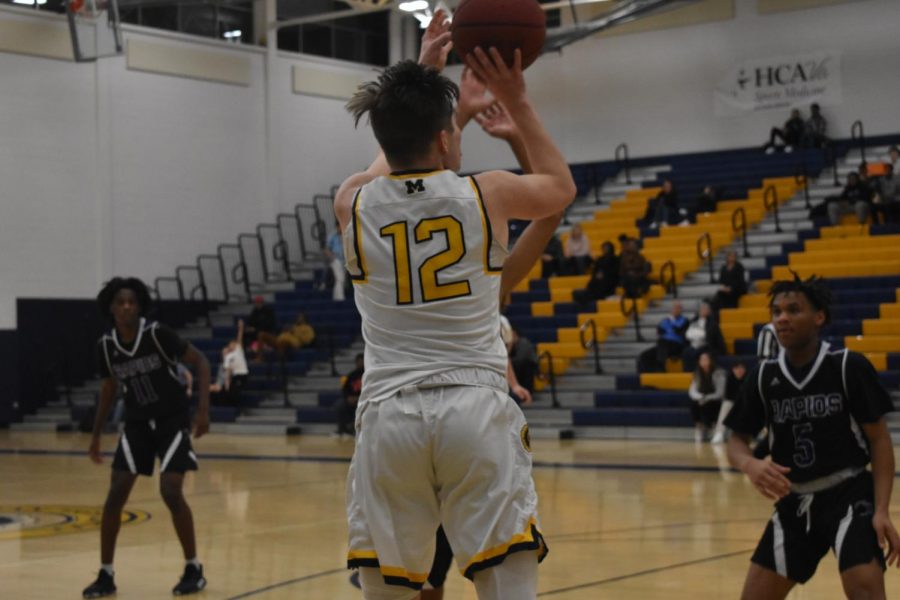 Nate Brown winds up for a three-pointer against James River.

On Wednesday, January 22, 2020, the Midlothian Boys Varsity Basketball hosted the James River Rapids in an intense rivalry game. The Trojans entered the game with high confidence, as this was the second match up against the Rapids this season. Pressure filled the air as both teams took the court, determined to win.

The first quarter of the game started with a bang, as both team came out with strong offense and defense. After swift ball movement, Carter Lovasz sank a 3-pointer, keeping Midlo a point ahead of the Rapids. Although the team remained discipline in their actions, the Trojans trailed at the end of the first quarter.  The second quarter began with the Rapids earning points, but the Trojans quickly responded with Ashton Phillips earning a 3-pointer, evening the score. As the game continued, each team fought for loose balls and focused on shots, trying to pull away with the lead. The student section rallied the team, giving players energy, as the half came to a close with the Rapids ahead 38-23.

The Trojans prepared to claim victory and took the court with confidence, set on winning the match up. Starting the third quarter, Keyshawn Key earned the Trojans two points right off the bat. Senior Thomas Rose then gave the Trojans a boost in the score after shooting a 3-pointer and scoring back-to-back layups. After an intense third quarter, the Rapids still remained ahead of the Trojans, leading into the final stretch of the game.

As the game reached the final quarter, the Trojans still trailed James River. The Trojans, not letting up, passed the ball to Lovasz as he sank yet another three. The Rapids countered by gaining several points, keeping their lead as time ticked down. Rose earned two foul shots, putting the Trojans within reach of the Rapids. After a long, hard-fought battle, the Trojans finished seven points short, ending the game 48-56 in favor of the James River Rapids.