Class of 2023 collects treats for the troops 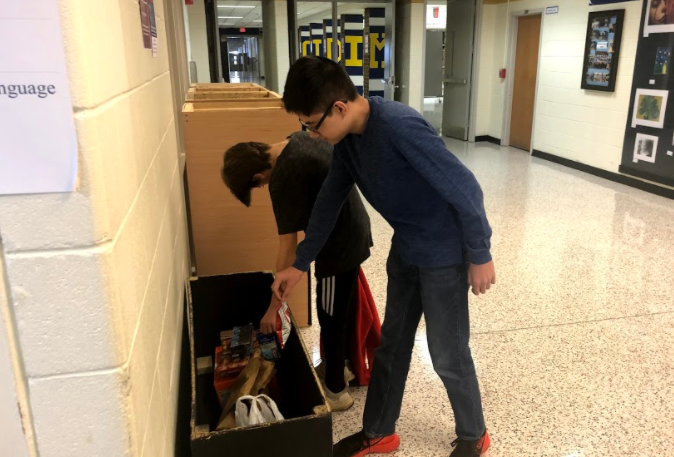 Freshmen do their part by collecting treats for military travelers.

Starting January 13, 2019, Midlo students began to collect donations for active duty military members. The freshmen class began a donation drive of snacks, foods, and assorted treats for U.S. military members going through the Richmond Airport. The United Service Organization is a non-profit organization with a focus on helping military active duty members at the Richmond Airport. Partnered with the USO, Midlo’s freshmen officers hope to make an impact and provide treats for travelers serving in the military. The officers at the forefront of this project, Brennan Lane, Skylar Cadell, Aaron Liu, Camryn Turner, and Kyle Reeder, feel passionately about the impact this effort can create. With the donations of all Midlothian High School students, the Class of 2023 hopes to  ensure U.S. veterans and active duty service members have plenty of treats to choose from as a thanks for their sacrifice to the United States.

The inspiration for this endeavor comes from Captain William Bailey and his Veterans Day assembly speech. He gave students a perspective many did not have before, as he explained how the horrors of war can affect veterans every day, and how their sacrifice should be known and appreciated. The Student Service Project is one of the many ways students can give back to service members. When asked about how he thinks the project will affect members of the United States military, Lane expressed, “I think that recent circumstances have made us very aware of what the armed forces risk every day, and we want to show our solidarity and appreciation for their willingness to serve. I believe that these military travelers will see that this student community cares about them and hopes to ease the difficulty of their missions in a meaningful way.”

The donation bin is located outside of the school counseling office. Snacks donated can consist of crackers, beef jerky, gum, fruit snacks, or any other small treat. As a Community of Excellence, Midlothian hopes to put members of the military and their families first, as they do for us every day.