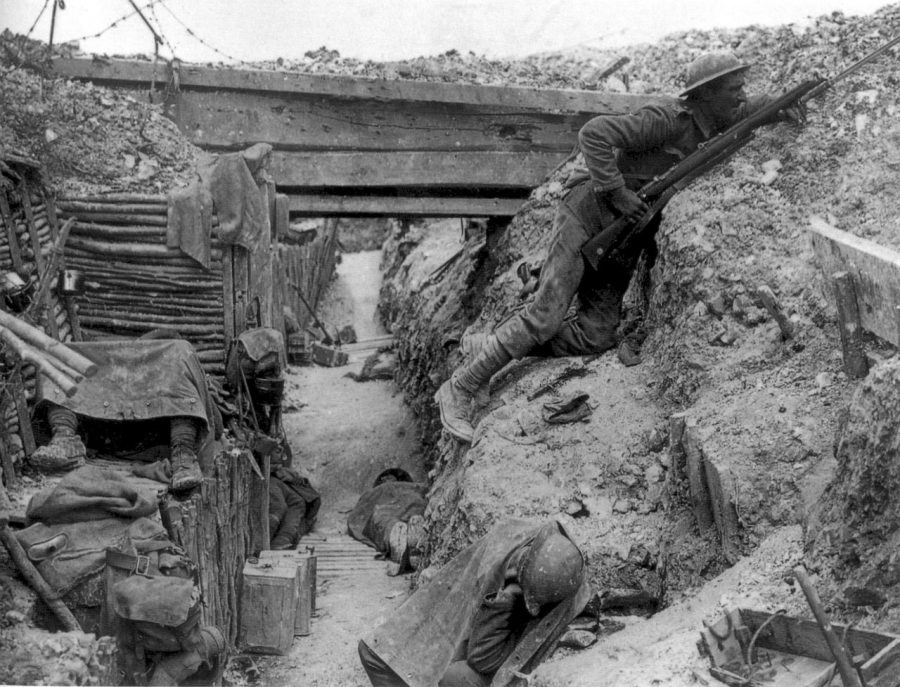 The trenches of World War I act as the both the living quarters and battleground for British soldiers in the movie 1917.

On January 10, 2020, the movie 1917 took audiences by storm as it was released in theaters across the nation. Already having won two Golden Globe awards and eight Critic’s Choice nominations, the World War I motion picture produced massive amounts of buzz and emerged victorious in box offices with higher rankings than Star Wars: The Rise of Skywalker. The cast ranges from esteemed actors, such as Benedict Cumerbatch and Colin Firth, to underground stars like Dean-Charles Chapman and George MacKay. Under Academy Award-winning director Sam Mendes, known for his achievements with the movie Skyfall back in 2012, 1917 gives audiences a jaw-dropping experience, as they witness the meticulous rivalry between the British and the Germans in a truly visionary way.

The film’s story encapsulates the unsettling moments shared between two British soldiers, Lance Cpl. Schofield and Lance Cpl. Blake, in Northern France, who are given a task that seems impossible. In less than twenty-four hours, the young men must successfully cross uncharted terrain and carefully navigate enemy trenches to relay a highly prized message to their counterparts. The message contains information concerning an order to halt a planned attack with the potential to take the lives of 1,600 British soldiers, including the brother of Lance Cpl. Blake. When the two young men are met with the daunting opportunity to fight against the odds, strategy plays an enormous role in their mission. Together, the soldiers attempt to carry out the impossible in an anxiety-ridden environment full of looming pressures.,

Director Sam Mendes worked alongside cinematographer Roger Deakins to bring the film, inspired by accounts told by his grandfather, to the screen. Combined with Mendes’ meaningful plot, Deakins proposed a bold method on how to capture the film’s contents. Due to the fact that the plot took place in a time span of one day, the entire movie was shot as if it were a single take. To give off this illusion, each scene was seamlessly placed together in eight minute intervals. The cast and crew rehearsed each scene’s tedious details in an empty field for six months prior to the film’s start date in an effort to grasp Deakins’ master plan. Along with physical walk-throughs, the brains behind the cinematic feature built miniature replicas of each set, so they could not only gather an understanding of the space they would soon work in, but also nail the timing of dialogue, learn lighting necessities, and ensure that the camera angles were precisely planned. For more information on 1917’s brilliantly crafted cinematography, click here.

Since the camera never lingers in a fixed location at any given time, audiences are propelled into the action themselves, as there is constant movement from one area to the next. The harrowing narrative sheds light on the emotional detachment existing in the trenches during the time of warfare. For two hours, viewers are submerged into the horrific nature existing in the perilous fight of WWI, yet audiences can not help but watch, as the chaotic moments breathlessly play out on the screen before them.