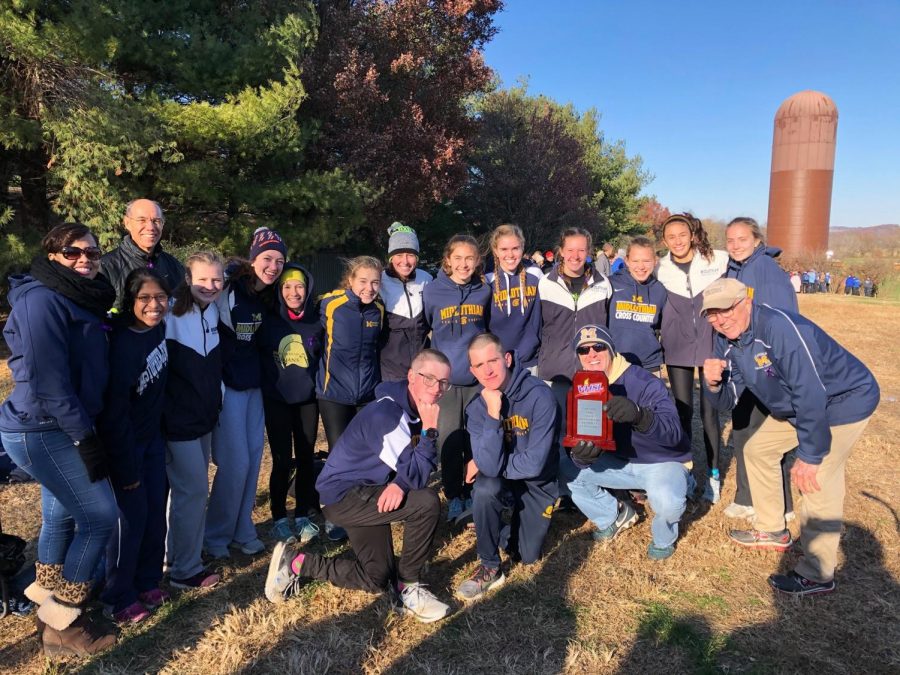 On November 16, 2019, Midlo’s Cross Country team competed in the VHSL Region 5A State Cross Country Championships at Great Meadows. This competition hosts the finest athletes in the state, and every competitor in attendance wants to win a state title. The meet challenged and pushed every athlete to their limits, forcing them to run up multiple hills and through a river, while enduring sixteen mile-per-hour winds and chilly temperatures. Despite these conditions, the Midlo athletes persevered, resulting in strong performances by all.

Over the course of the season, the Midlo Varsity Girls have continued to demonstrate their power; the team has racked up three first-place finishes, including a victory at the VHSL Region 5B Cross Country Championships. These prior successes indicated to all that these athletes had a true shot to stand on the podium at the state meet. At 1:00 pm, the starting gun sounded, and the Midlo Varsity Girls began their twenty-minute endeavor. The team consisted of: Gabriella Garcia, Kylie Bonser, Caroline Bowe, Katherine Krievs, Nicole Quiram, Chloe Martin, and Annabel Schepker. As the runners began the first mile, Garcia and Bonser progressed rapidly through the pack of runners, setting both up for an impressive race. Close behind, Bowe, Schepker, Krievs, and Quiram worked together to finish the first mile in a high position. The next 2.1 miles proved a test of strength, determination, and grit, for every step taken held importance. As the finishing line approached, Garcia fended off an entire field of athletes and finished the race in second place, earning the title of VHSL Class 5A State Individual Runner-Up. Garcia remarks that she “is really excited with [her] outcome.” Freshman Bonser also made a statement as she crossed the finish line in 5th place; she was the first overall freshman to finish the race. Close behind, Bowe gave her all in the last fifty meters, finishing in fifteenth place. Krievs followed in twenty-ninth place, Quiram in thirty-first, and Martin in forty-seventh. Schepker, despite some challenges, finished in ninety-third place, rounding out the team.

Although the Midlo Varsity Boys did not send a full squad to the state meet, Brian Tavenner and Will Gardner qualified for the race as individuals. Throughout most of the race, the two athletes worked together, as they have all season, to try and earn their fastest times of the season; Gardner achieved this goal, setting a new personal record of 16:31, finishing in eighteenth place. Tavenner narrowly missed a personal record but still finished in the top third of the field, crossing the line in twenty-eighth place.

The combined efforts of all of the Midlo girls resulted in the team finishing in second place in the team competition, earning them the title of VHSL Class 5A State Runner-Up Team; these girls have worked for this honor since May of 2019. Individually, Garcia, Bonser, and Bowe made the all-state team and received medals for their efforts.

On November 30, the Midlo Boys and Girls Varsity Cross Country teams will compete in Nike Southeast Regionals in Cary, NC.