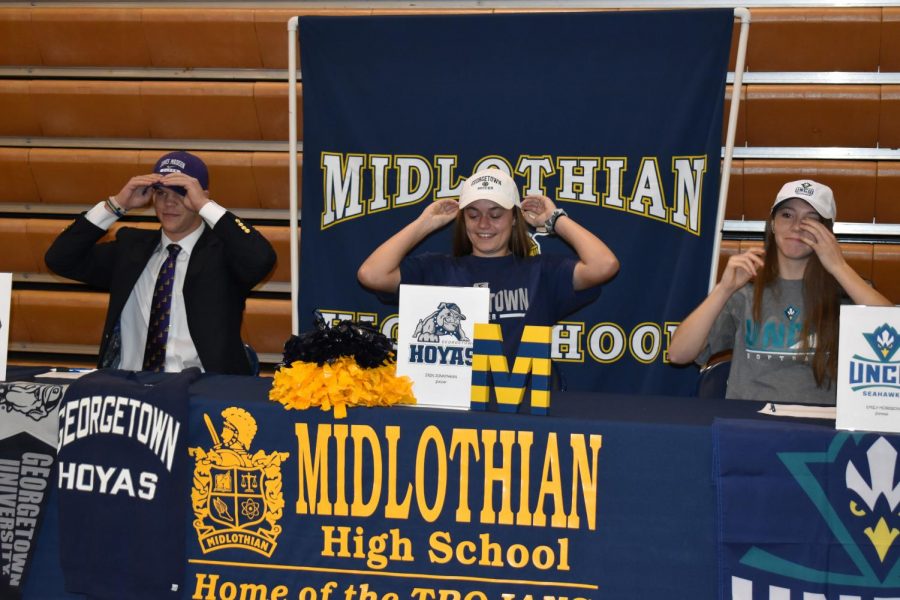 On December 18, 2019, committed athletes all around the United States signed their National Letters of Intent to officially commit to colleges. This year, Midlothian High School welcomed family and friends into the Auxiliary Gym to support Erin Junkmann, Christian Chambers, and Emily Morrison, as they signed their NLI, officially committing to their colleges.

Erin Junkmann has played soccer since the young age of two, growing up watching her older sister, Emily, play with her dad as the coach. After growing a strong passion for the sport, Junkmann joined Richmond United ECNL, as a center defender and attended camps and tournaments, where she met her soon-to-be coaches. Then, after obtaining the required test scores, Junkmann announced her verbal commitment to Georgetown University at the beginning of her junior year. On Wednesday, November 13, surrounded by family, Junkmann signed her National Letter of Intent to officially join the Hoya family.

Christian Chambers began baseball at the age of 4, after watching his father, the current Midlothian coach, play.  Once Chambers fell in love with the sport, the idea of playing at the collegiate level was set in stone. To obtain his dream, Chambers lended his talents to the Evoshield Canes this past summer as a short stop and worked hard every day until eventually, the James Madison University coaches spotted him while he was still a student at Monacan High School. Once transferring to Midlo and keeping in contact, Chambers committed to the Dukes on October 14, 2018. Before school on November 13, Chambers, surrounded by family, friends, and coaches, signed his National Letter of Intent, signifying the start of a new chapter in Harrisonburg.

At the age of 9, Emily Morrison received a flyer for Huguenot Little League and quickly signed up. From that moment, her passion for softball continued to grow. On the Hanover Hornets, Morrison, a pitcher, worked to obtain her childhood dream of playing collegiate softball.  After dreaming about playing softball in college since a young age, Morrison attended camps and tournaments, where her future coaches spotted her. Then, on December 5, 2018, Morrison eagerly announced her verbal commitment to play softball for the University of North Carolina-Wilmington Seahawks.  Finally the day came, and on November 13, Morrison signed her National Letter of Intent to join the top-notch Seahawk program.

The event on December 18 provided the opportunity for these stellar Midlo athletes to sign together in front of family, friends, teammates, coaches, and faculty. On this afternoon filled with smiles and accolades, these young athletes took a significant steps toward attaining their dreams.