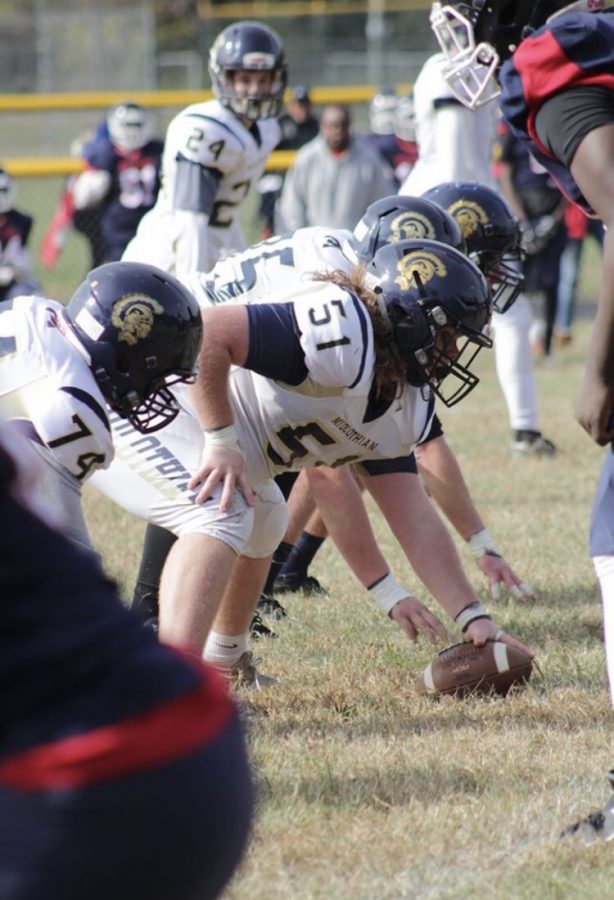 Sophomore Declan Harrington prepares for the snap of the ball to Trojans offense.

On Saturday, November 9, 2019, Midlothian Trojans Football traveled to George Wythe High School for the last game of the season. Before the start of the game, Midlo faced a setback, as many of the senior players were out due to injuries. Although faced with adversity, Midlo held strong as they entered the final game of the 2019 season. The night proved bitter-sweet as it marked the final time many seniors will play the sport they love.

With kickoff starting at 12:00 pm, the Trojans prepared to receive the ball from from George Wythe’s kick. The offensive line blocked the Bulldog defense, as the attacking offense ran the ball into George Wythe territory. Then, a mistake by the Trojans caused a fumble, recovered by the Bulldogs. The Trojans began to fight back in hopes of win the ball back; this proved successful as the defense caused a George Wythe fumble. Junior Anthony Schwartz earned the first points on the board by recovering the fumble and taking it into the end zone for a Trojan touchdown. Then freshman Maxx Lawton made the extra point, giving the Trojans a lead of 7-0 within the first quarter.  With the Trojans in the lead at the start of the second quarter of the game, Lawton punted the ball into the Bulldog territory. After tough defense on both sides, Midlo went into the locker room at half with a 7-0 lead.

Once returning to the field from halftime, the Trojans worked to hold their lead for the rest of the game. Midlo then executed a kickoff  to start off the second half of the game. Senior quarterback Christian Chambers then looked down the field to junior Jovontae Smith and threw a 28-yard pass, giving the Trojans another touchdown. Lawton then made the extra point field goal, bringing the score to 14-0. With Wythe now taking control of the ball, the Trojan defense gave up a 49 yard pass, resulting into a touchdown for the Bulldogs, bringing the score to 14-6.

The Trojans took the game back during the fourth and final quarter. Junior Ed Clark made multiple tackles on plays, giving the Trojans offense room to run. Chambers then delivered a 25 yard pass to junior Jalen Rembert for yet another touchdown, making the score 21-6 in favor of the Trojans. With excitement mounting,jJunior Braden Berger stepped out on the field, playing a foreign position, tipped a Bulldog pass and allowed junior Collin Seiler to catch the ball and run 69 yards into the Trojan end zone. This drive encouraged teammates such as Kameron Olds, Braden Lee, and Chad Harlow to all earn points for the Trojans in the last game of the season. As the clock ticked down, the Trojans earned the last win of the season by a score of 36-6.

A variety of emotion overcame the team as they finished their season with a win, but also because they will lose many valuable seniors. Chambers states, “ It felt like I lost a best friend; I have played football ever since I could walk, and to know it’s over is heartbreaking. Not being under the Friday night lights and spending every day with my best friends is what I will miss the most.”  Many shed tears as the Trojans hung up their cleats for the last time in the 2019 season, which ended with an overall record of 3-7.