Kirkbride walks to support an end to Alzheimer’s 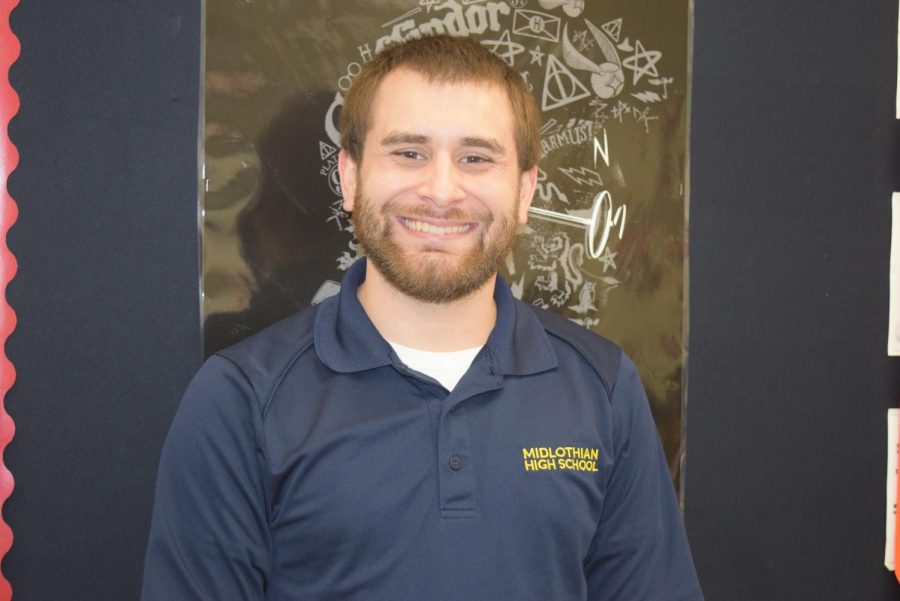 The Walk to End Alzheimer’s took place in Richmond, Virginia, on November 2, 2019. A member of the Midlothian High School Social Studies Department, Mr. Nicholas Kirkbride, participated for his fourth year in a row, alongside the school organization he sponsors, the Alzheimer’s & Dementia Awareness Club.  Kirkbride encourages his students to participate in the walk through instilling a need to support the cause and serve the community. Through his lessons in his AP/IB Psychology classes, he spreads awareness about Alzheimer’s to educate his students about the disease.

Why does your club participate in the walk?

Midlothian’s Alzheimer’s & Dementia Awareness Club was originally [Midlo alum] Dillon Powell’s idea. Dillon approached us with the idea for the club because he had a personal connection to someone who had suffered through a neurocognitive disorder and thought two psychology teachers might be willing to support him in creating a club centered on raising awareness for the cause. Once the club was established, we wanted to find ways for students to not only learn more about the topic but also get involved and have ways to volunteer their time; this led us to discover that every November there is a state-wide walk here in Richmond, Virginia.

How has the experience changed your life?

Thankfully, from the very beginning, we created a partnership with Spring Arbor The Cottage at Salisbury, and they have been instrumental in educating each year’s new club members and offering volunteer opportunities. Being involved with this club has also put me in touch with a local choir called Joyful Voices that [offers] individuals dealing with Alzheimer’s and their caregivers a chance to sing with one another as a form of music therapy.

Meeting the people involved in those two organizations and seeing how students are able to share stories about loved ones who have dealt with Alzheimer’s or dementia has warmed my heart. Furthermore, the club has allowed me the chance to reveal to students how psychology exists beyond the classroom.

Do you have a personal connection to Alzheimer’s?

Personally, I was happy to sponsor the club, as I have an uncle with early onset dementia and another distant relative that has severe Alzheimer’s and dementia. The courses I teach have also helped me to see that the prevalence of Alzheimer’s disease is going to become more significant for future generations, and thus, I believe the more students I can prepare for that reality the better.

Is it rewarding to see your students walking alongside you?

Seeing students take part in the walk raises the level of hope I have for the future because if students can become aware of the impact of Alzheimer’s disease now, then perhaps they will do more to help others with the condition in the future. As a social studies teacher,  I am always reflecting back on history and wanting to provide my students with knowledge and tools to not make the same mistakes and to do better with their future than previous generations have thus far.

Having students willing to go each of the past four years and having the number increase every year, (we had 25 total students attend this year), adds a small sense of accomplishment that the club is growing in the impact it is having. We often have 45-75 members at our meetings in the building but to have 25 students willing to give up a few hours on a Saturday is quite the feat.

As a psychology teacher, do you think the money raised may lead to a cure?

Honestly, I don’t know if the money raises will cure Alzheimer’s disease in my lifetime or my students’ lifetime; however, I think the involvement generated by the walk and the awareness gained could drastically change how participants view those who are fighting Alzheimer’s disease and how much they are willing to help down the road. That sounds like a win to me.