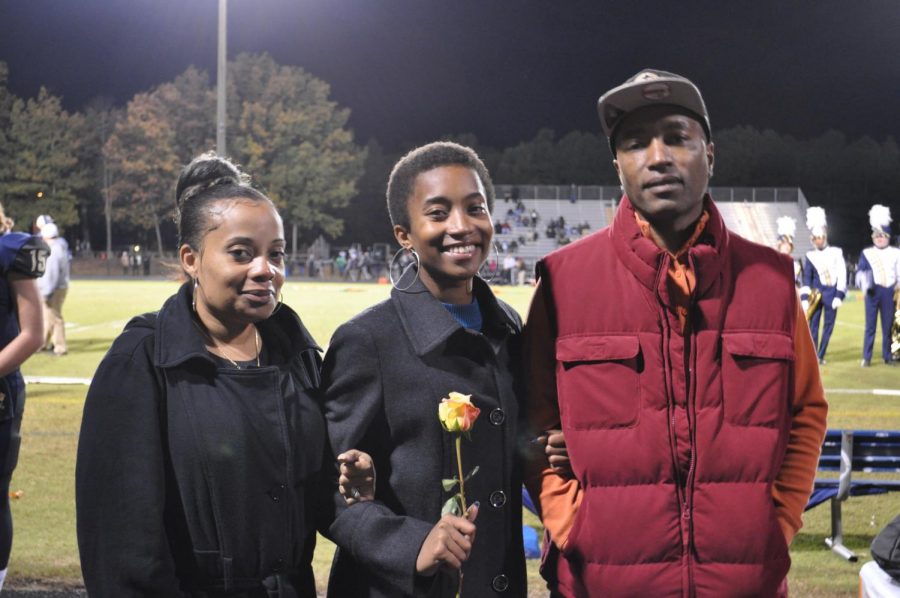 Cameron Lee stands with her parents on Senior Night.

On Friday, November 1, 2019, the Midlothian High School Trojan Marching Band (TMB) and the Midlothian High School Trojanettes celebrated their senior nights at the last home game of the 2019-2020 season. The Trojanettes received recognition alongside the football team and cheerleaders before the game, while the members of the TMB celebrated following the completion of their final halftime performance. Parents of  Trojanette and TMB seniors lined up with their children to escort them down the track as the announcer read their names and future plans to the audience of students, parents, and fans.

The Trojan Marching Band seniors and their families met before the game to enjoy a catered dinner together, while they reminisced about their favorite memories from the past four years of performing and competing together. As for many seniors, their last time playing with the TMB or participating in an activity of this sort, Senior Night served as an extremely emotional and impactful event. Drum Major Jakob Marshall comments on his TMB Senior Night, sharing, “It was sad because it was the last game ever, but it was overall a perfect way to end my four years.”

Dance team parents escorted their seniors before the game commenced. This was the last time they would spend their Friday night dancing to Midlo’s marching band music at a football game. The Trojanette seniors decided to perform their hip hop dance for their last halftime performance because the team loves this performance style. When asked what she will miss most about being a Trojanette, Maddie Lloyd comments, “I am going to miss all of the football games and close friendships I have made.”