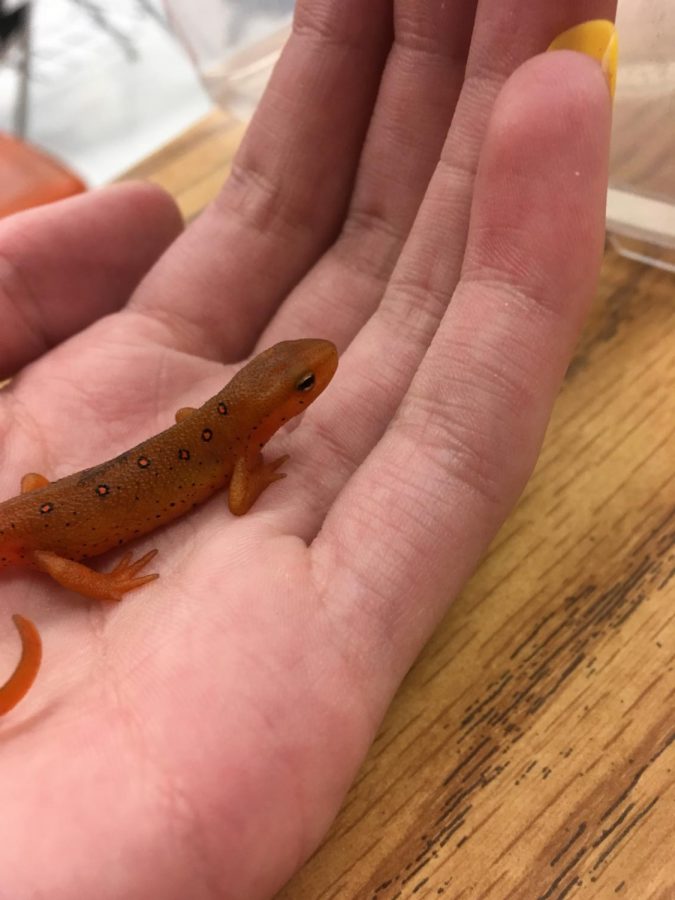 Students bond with Noodle every day during lunch, band class, and class change.

Last week outside the school building, band students Rachel Smith and Sam Heft found a red and orange speckled salamander in the grass and adopted it as a pet. They decided to name him Noodle Fletcher Gordon after Mr. Taylor Fletcher and Mr. Gordon Rawls. Now, Noodle migrates between the homes of the band students, never staying in a home for too long. The host student will bring Noodle to school the next day to pass the “Salabander” to the next student.

Noodle, a very personable lizard, enthusiastically eats his newt and salamander food. Mollie Jones describes him as “very friendly” and loves spending time with him. He used to live in an old pretzel container that he inherited from a Betta fish, but now he has a terrarium, where he spends most of his days.

Sophomore Asheley Jennings notes that Noodle is “very exciting and brings life to the band,” uniting the group into a tighter community. Noodle loves to dance whenever there’s a funky beat, especially his favorite band, the Midlo Trojan Marching Band;in fact, he is known for being the life of the party and having energy for days. “Noodle is so adorable, and the whole band argues about who gets to take him each night,” comments Kate Tabor. A happy accidental sighting has turned into a special relationship, as the Midlo band students cherish their new mascot.