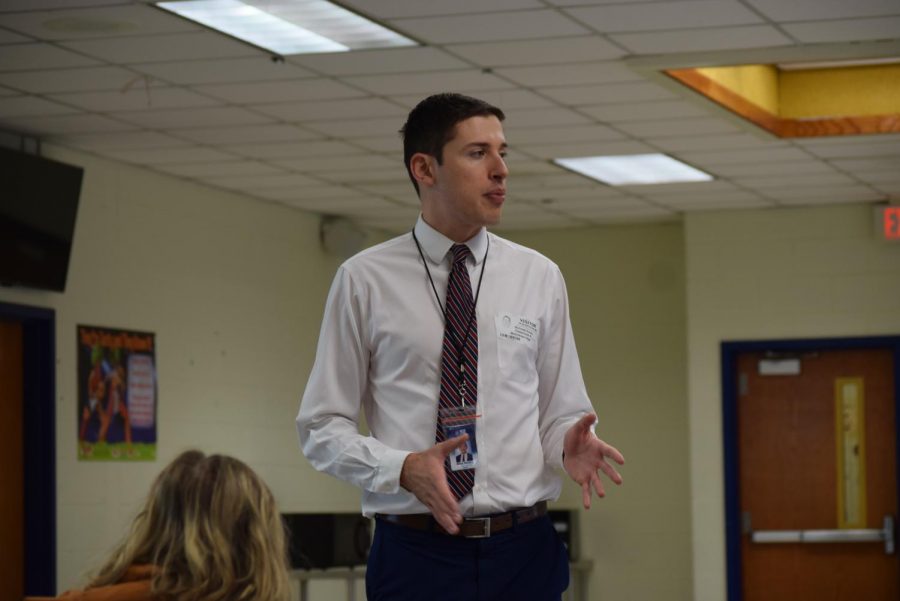 On Tuesday, October 29, 2019, Mr. Scot Burns’ first period Meteorology class took part in a special opportunity, as they hosted NBC12 First Alert Weather Specialist, Nick Russo. Students gathered in the Closed Commons to listen to Russo describe how he began his career as a meteorologist and explain the different weather patterns. Senior Ryan South shares, “This was a unique learning opportunity that was very beneficial to me and my class.”

A Boston native, Russo explained how “[he] knew [he] wanted to be a meteorologist since the 5th grade” and how earning a major in Journalism and a minor in Meteorology from Lyndon State College prepared him for a successful career. After working as a broadcaster in Flint, Michigan, Oak Hill, West Virginia, and Midland, Texas, Russo moved to Richmond in October of 2018, accepting a position at NBC12.

“I really wanted my students to know possible career paths in Meteorology ,and luckily, Russo was kind enough to share his own experiences. [He] explained [that] to become a meteorologist, you do not need to major in Meteorology, because he majored in Journalism. Also, I wanted students to see a real weather person leading up to their final project, which is creating their own forecast in front of a green screen,” reflects Mr. Burns.