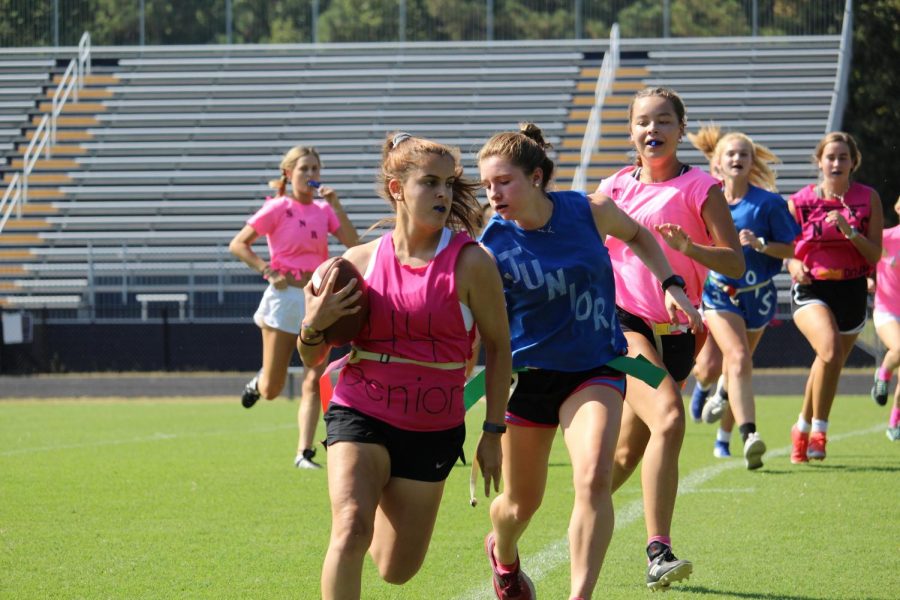 On Thursday, October 3, 2019, the students of Midlo gathered to cheer on their classmates in the 2019 Powder Puff game. Football enthusiasts eagerly poured into the stadium to witness yet another showdown between the junior and senior girls. The Midlothian High School Drumline entertained the crowd with upbeat music, while the ladies warmed up. After a win over the Class of 2019 last year, the Class of 2020 entered the competition, now as seniors, in hopes of a second victory.

This year, Braden Berger, Tahja Collins, Colin Seiler, and Anthony Schwartz coached the juniors, and Noble Dodge, Ray Eppes, and Justin Kopecko coached the seniors. Under the direction of these seasoned football players, each team conducted various practices in the weeks leading up to the game.

As the competition began, each team huddled to discuss strategy, then took the field with a competitive spirit. Juniors donned blue jerseys, and seniors dressed in pink. When the clock began, senior Erin Junkman snapped the ball to quarterback Tegan Lee, who ran it down the field until stopped by juniors, who forced her to the sideline.

Minutes before the first quarter ended, junior Amanda Lanyon intercepted a pass thrown by the seniors, leading to a turn over. Now on offense, junior quarterback Abbie Campbell faked a pass to throw off the seniors. This proved successful, resulting in a 43 yard gain by the juniors. As the time for the first half ran out, the score rested at 0-0.

After halftime, the girls returned to the competition more pumped than ever, with the seniors now on the offensive side. Lee sent the ball sailing down the field, but Lanyon intercepted it and ran towards the end zone. The crowd erupted into cheers, as the seniors attempted to stop Lanyon, who gained multiple yards for the juniors.

Following the junior touchdown, the seniors had one last chance for redemption with just over two minutes left on the clock. In an impressive play, Lee managed to travel to the 38 yard line on the first down. Unfortunately, the seniors proved unable to capitalize on the opportunity, and the time wound down with no gains on the senior offensive.

Senior Anna Basir reflects on this year’s loss, stating, “We did good running the ball, and it’s really disappointing that we lost to the juniors, but it was still a lot of fun.” The victorious Class of 2021 hopes to return next year and take the Powder Puff Title once again s seniors.