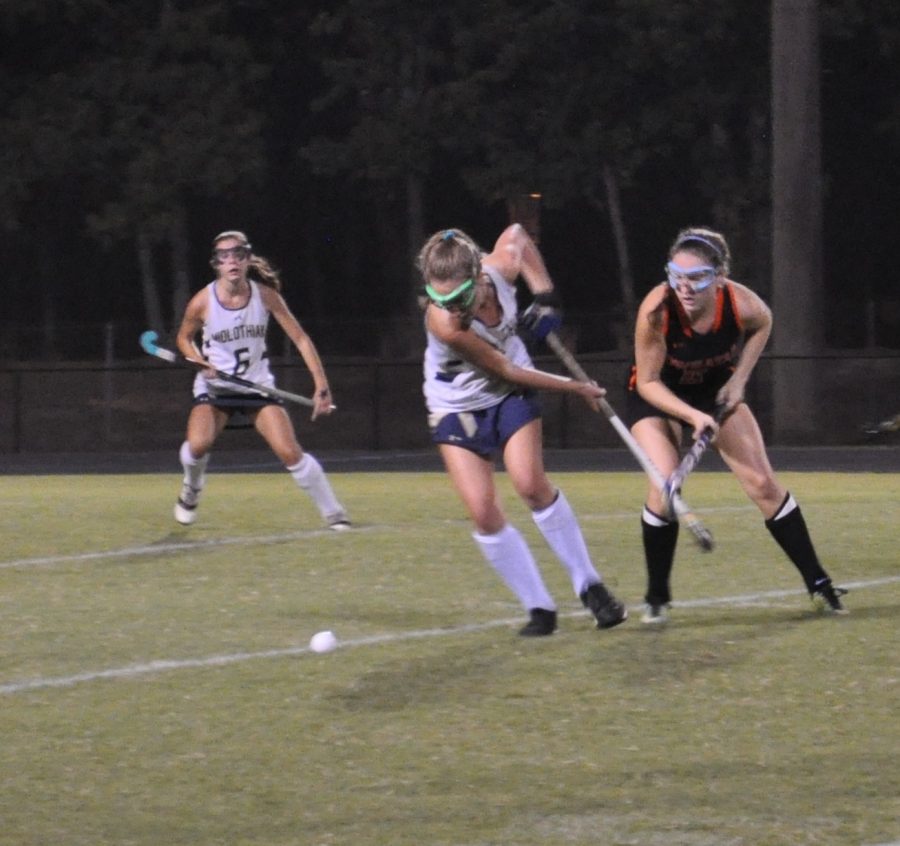 Ava Hammond hustles to gain possession of the ball in the game against Powhatan.

On Wednesday, September 25, 2019, the Midlo Field Hockey team rivaled some of their fiercest competitors, the Powhatan Indians. With an undefeated record and a two-game winning streak against the Indians, Midlo entered the match eager to add another win under their belt.

After a focused warm up and pep talk from Coach Rebecca Lowe, the Trojans broke with a cheer and took the field. Within the first ten minutes, the ball traveled back and forth, as each team struggled to maintain possession. Each side drew multiple corners but proved unable to capitalize on the opportunities.

With twenty minutes left in the first half, Powhatan scored, breaking the tie. Fueled to even the game, Midlo reciprocated with a fast break from captain Liza Hopper, who dribbled down the sideline and sent a strong drive to center. Standout sophomore Ava Hammond received the ball and flicked it to sophomore Hayden Strausburg, who drove it into the goal. With outstanding intensity on both ends, the score rested at 1-1 for the remainder of the half.

As the whistle blew for halftime, Midlo gathered to talk strategy. Pumped up and ready to win, Midlo and Powhatan took the field for a much anticipated second half. Each side held strong defense, and as the time dwindled down to three minutes, the score remained at 1-1. Finally, Hammond dribbled past the Indian defenders to Midlo’s offensive side. From there, Strausburg hit the ball past the goalie, completing her second goal of the night. With the feeling of victory, Midlo erupted into cheers.

Powhatan responded with a sense of urgency. The Indians carried the ball to their offensive end and drew the foul, resulting in a corner. Powhatan fans stomped on the bleachers, as the Indians set up for the corner, their final scoring opportunity. Midlo held strong, but with only one minute left, Powhatan sent the ball sailing into the goal, tying the game in an upset, sending the game into a fifteen minute sudden victory overtime. Exhausted but hungry for the win, Midlo players set up, ready to win and continue their reign over the Indians. Apparent that both sides desperately wanted to dominate, neither team scored in the overtime period, which directed the game into a shootout round.

Each team chose five competent players to perform a one-on-one against the goalies; whichever team scored the most goals determined the winner. Midlo players lined up on the field to cheer on the participating teammates and goalie Kelsey Seiler. Each attempt came close, but only junior Riley Martin completed a goal, utilizing a spin dodge around the Powhatan goalie.

Unfortunately, the Trojans ultimately scored fewer goals in the shootout, falling to the Indians 3-2. Although defeated, they played an immensely cohesive and energetic game against their rivals. Senior Emily Muncie states, “It was a hard fight and worth the late night. It taught us a lot as a team not to take anything for granted.”

Midlo Field Hockey will play their next game on Monday, September 30, 2019, on their home field against the Clover Hill Cavaliers.