Class of 2023 Officer Speeches and Election 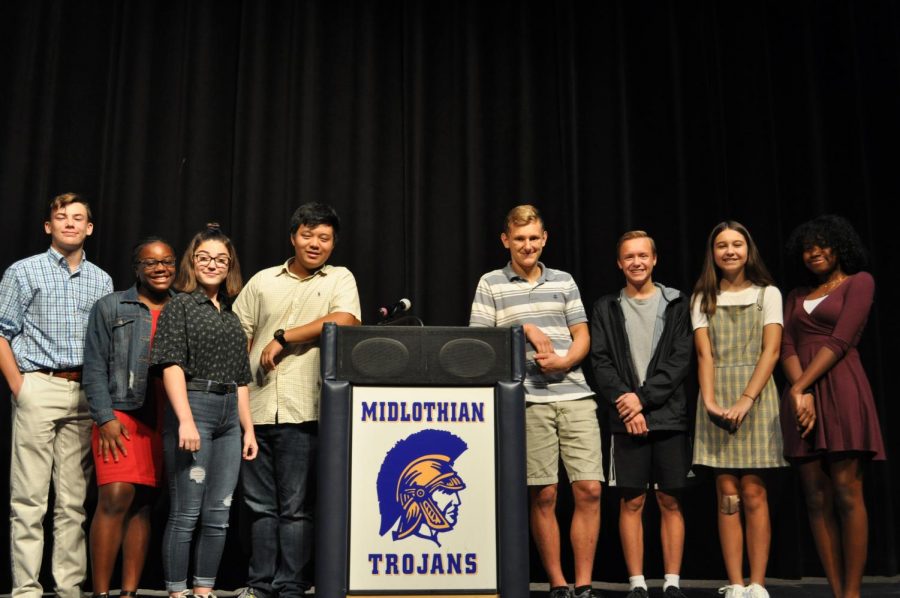 On Monday, September 16, 2019, the Class of 2023 made their way into the auditorium to listen to the speeches of their fellow classmates interested in representing them for the 2019-2020 school year. Public speaking is a daunting task, but the candidates took it all in stride as they spoke about their goals and ideas in front of a crowd of around 600 peers.

Brendan Lane kicked off the elections by catching the attention of the entire crowd when he explained that if he were elected he would “not allow the freshmen to wait their turn behind upperclassmen,” explaining how a poor mentality wastes too much time. The race for the presidency intensified when Kennedy Olds introduced herself and inspired the crowd by telling a story of how her track team rose from a rating of 11th to 3rd through hard work. Both Lane and Olds committed to working hard to ensure the class of 2023 would have the best year of high school ever.

Skylar Caddell, who ran unopposed for the Vice Presidency. reassured the freshman class that, although she had no competition, she would still work hard and maintain high standards.

Aaron Liu began the speeches for the position of Treasurer by promising to do everything within his power to bring the freshman class closer together. This received a standing ovation from the crowd, which led Liu to wait several minutes before he continued to speak. Severin McNulty also campaigned for Treasurer, telling the crowd about his experience in leadership positions and his “vast financial knowledge” collected over the years. Both candidates offered ideas for fundraisers and other events throughout the year.

Next up, the candidates for Historian detailed their goals for the 2019-2020 school year. Isabella Vanderborg began the speeches, explaining the requirements of her position and how best she could serve the Class of 2023. The second candidate for Historian introduced herself as Camryn Turner and made it clear to all that her goal was to “transform [freshmen] from people we occasionally bump into in the crowded halls of school to people we smile at, eat lunch with, and go to the movies with.” Kyle Reeder spoke next, waking the crowd up from the haze of speeches, joking about how they were all happy to finally be out of middle school, which drew chuckles from the crowd. With everyone’s full attention on the stage, Reeder explained a program he participates in outside of school, Leaders Club, and the experience it has given him.

With the conclusion of Reeder’s speech, Mrs. Molly Palenski, Freshman Class Sponsor, took the podium to officially announce the opening of the polls. A rush of noise filled the auditorium as students opened their backpacks to retrieve their Chromebooks and begin voting. At the end of the voting session, the votes were tallied, but before announcing the results, Mrs. Palenski explained that there were only candidates for four out of the five positions. She noted that in the race for Historian, one candidate had lost in a close race by a mere six votes, and with such a close race, it was clear that the Freshman class wanted both of the candidates, so the position of Secretary would be filled by the second-place Historian candidate.