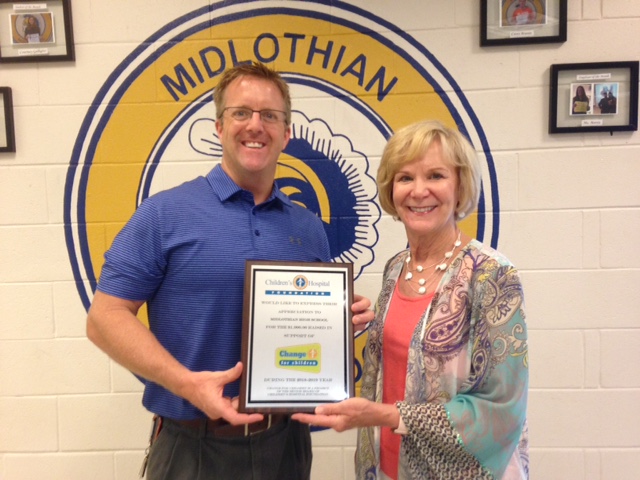 Jeanne Kreiser, a representative from VCU Children's Hospital, presents Dr. Abel with a certificate of appreciation.

Every year the duty of planning prom falls to the Junior Class of Midlothian High School. The class of 2020 decided to send off the Senior Class with a good feeling in their hearts.

By tradition, the Junior Class uses prom funds to purchase a small prom gift for each senior in attendance. This year, instead of giving a gift to everyone, the Junior Class gave a gift from everyone by donating over $1,000 to VCU Children’s Hospital. Midlothian High Principal, Dr. Shawn Abel, gives all credit to Midlo’s Junior Class for this tremendous gesture.

According to the Junior Class Sponsor, Mrs. Rachel Aiello, the Junior Class officers were at a loss as to what favor to purchase for the Senior Class . Putting themselves in the seniors’ shoes, they decided to use the money for something more important, a worthy cause. When one of the officers raised the idea of a donation as the favor, the Junior Class jumped on the idea. The Senior Class liked the idea and put a voting form on the back of the invitations to prom. After counting the votes, the VCU Children’s Hospital emerged as the most popular choice.  Mrs. Aeillo hopes the donation becomes a tradition, adding,  “Instead of getting a key chain, you have the opportunity to change someone’s life for the better. What’s a better favor than that?”