Fall sports gear up for a new season of fierce competition 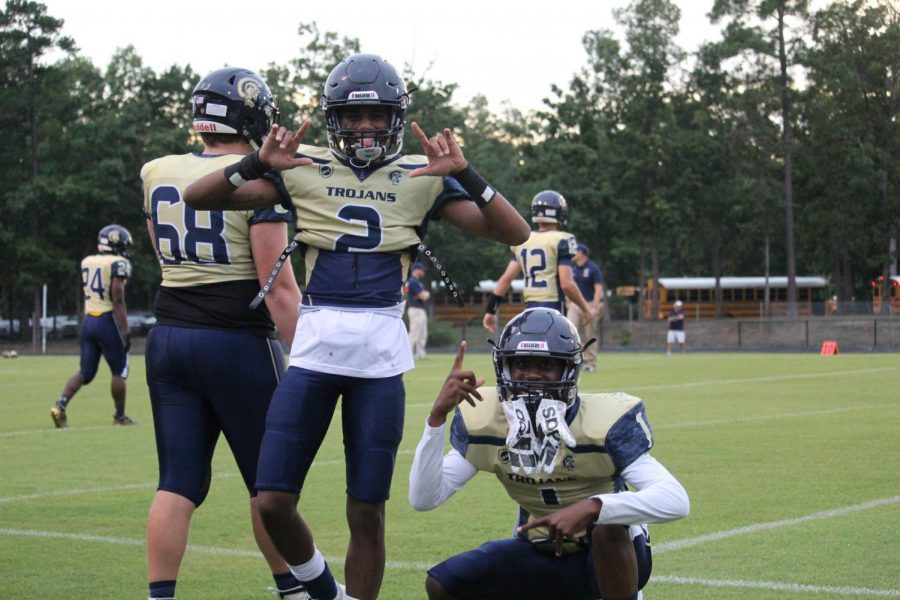 Midlo Football prepares for a successful season under Coach Hutchings.

Field hockey: This season, Midlo Field Hockey welcomes new head coach, Rebecca Lowe. Tryouts took place in early August, and since then, the team has been hard at work in preparation for their challenging schedule. Returning captains, junior Kaitlyn Moore, senior Liza Hopper, and senior goalie Kelsey Seiler, look to lead the team to a victorious season once again. When asked about her goals for the season, Moore shared, “We hope to make it back to States and go even farther than last year.” They’re off to a promising start, as the team won the past three games against Powhatan, Manchester, and Cosby. They hope to maintain their winning streak as they continue into the season.

Football: Under the direction of Head Coach Matthew Hutchings, Midlo Football looks to another intense season. Leading the team this year are captains: James Oliver, Christian Chambers, Brian Davis, and Jhad Corwise. They have a developed team this season, with thirteen seniors on the roster. Also, the team welcomes new key player, senior Raquan Eppes. Although they left the competition in the first round of playoffs in the 2018 season, they hope to make it farther this year with their stacked team. Oliver states, “Our goal this year is to make it to States.”

Golf: After winning States for two consecutive years, the Midlo Golf team looks to continue the success of its past seasons. With the leadership of Coach John Pruitt and senior captain Ryan South, the team hopes to dominate the course and make it back to the State Tournament.  As the team strives to make it to States, they have added three new freshmen, who hope to add depth to the roster. “After making it to States last year, I hope we can return and hopefully win the Championship,” exclaims South. Golf will play next on Tuesday, September 17, 2019, against Cosby and Manchester at Magnolia Green Country Club.

Boys Volleyball: The Midlothian High School Boys Volleyball team returns to the court this fall on a mission to redeem themselves after last year’s heartbreaking loss in the State Semifinals.  Under the leadership of Coach Ian Wajciehowski, the Trojans will turn to senior captains, Ethan Smith and Ryan Monahan, to lead the team on and off the court. The Trojans have added several new players, including junior Alec Townsend, and brought back senior forces, Carson Parrish and Joey Chung. Parrish exclaims, “I really hope we make it back to States and have a good season.”

Girls Volleyball: This year, with the addition of several new players, the Midlothian Girls Volleyball Team looks to use their youthful team to their advantage in order to reach the State Tournament. Along with Coach Sherman Chung, senior captains, Mary Courtney Hettinger and Olivia Ibanez will strive to lead their team to a successful season. Along with many returning players, the Lady Trojans added Bela Sayers, Kelsey Ward, Heather Spichiger, Sara Rich, and Gabrielle Leeper. After a trip to the Regional Semifinals, the Lady Trojans hope to make it to the State Tournament. Senior captain Hettinger says, “I do not think this year is going to be a rebuilding year, and [think] we can make it to States.”

Boys Cross Country: The 2019 XC Season will be a rebuilding season for the Midlo boys; the team lost seniors and top performers Max Etka, Andrew Steenkamer, Ian Gray, and Thomas Gray. However, returning runners include: Will Gardner, Joey Maguire, Ben Scott, and Brian Tavenner, who are embracing the new additions to the varsity squad, Ben McCormack, Austin Berg, and New Balance Nationals participant, C.J. Mierchuk. While the team may look to rebuild, they could very well repeat their performance at the VHSL State XC Championships, where they finished in second place.