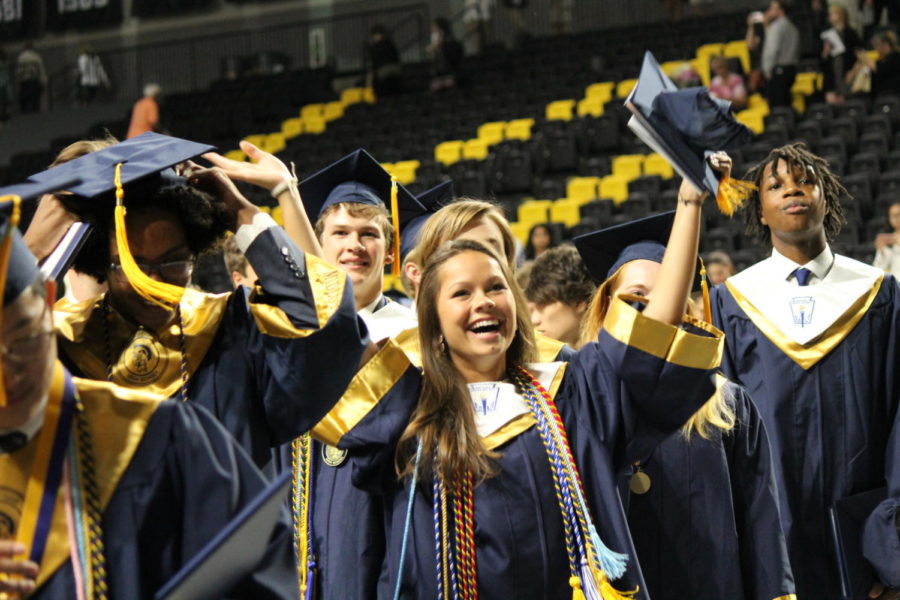 After months of anticipation, the big day for seniors arrived on Wednesday, June 5, 2019, Graduation Day. At the Siegel Center, the Class of 2019 donned their caps and gowns and prepared to say goodbye to Midlo and hello to the future. As parents and guests streamed in and found their seats for graduation, the seniors patiently waited in the wings, spending the extra moments to enjoy time with their friends. At 2:30 pm, the Class of 2019, directed by class sponsors, Mrs. Carolyn Manheim and Mr. Chris Eliot, confidently entered the Siegel Center to Pomp and Circumstance, beautifully executed by the Midlothian High School Trojan Band, conducted by Mr. Gordon Rawls.

After the eager seniors marched into the stadium for the first time, wide-eyed and ready to walk the stage, they took their seats. Class President Sujeet Alwin welcomed everyone and introduced the Monacan High School Air Force JROTC to present the colors, followed by the Pledge of Allegiance and The Star Spangled Banner, performed by Midlo’s choral students, under the skilled direction of Mr. Atticus Finn.

CCPS Superintendent Dr. Merv Daugherty spoke to the seniors about the importance of integrity and attitude, explaining that the most important possession a person must protect is his name. After his thoughtful speech, Dr. Javaid Siddiqui, CCPS School Board, assisted him in presenting two graduates, Rachel Rivera and Dylan Coleman, with the honor of the Superintendent’s Award, which includes $1,000 scholarships and Superintendent’s Award medals. Dr. Siddiqi and Mrs. Leslie Haley, Chesterfield County Board of Supervisors, both offered words of inspiration to the Class of 2019, before yielding the podium to Midlothian High School Principal, Dr. Shawn Abel.

Dr. Abel introduced the Class of 2019 salutatorian, Tess Wlader, who gave a witty speech that centered around an extended reference to The Office that had the audience chuckling and nodding as she made her points. Valedictorian Kyle Kuennen took the microphone next to address his classmates. Among other topics, his speech referenced Walt Disney, who ironically once was fired for a lack of creativity and imagination. He encouraged everyone to work hard to achieve their dreams, but to do so with integrity.

Midlothian’s choral students performed a touching rendition of The Road Home, by Stephen Paulus, followed by Dr. Abel, who used a key song from Midlo’s Spring Musical, Man of La Mancha, The Impossible Dream, to encourage the graduates to reach for their goals and push through defeat. Abel issued a moving tribute to longtime Theatre teacher Mrs. Katherine Baugher, who retires this year after enriching the Midlothian community for an impressive 48 years, challenging the Midlo seniors to find their passion and make a difference.  Next, the Top Ten scholars from the Class of 2019 (listed below) rose as Assistant Principal Dr. Robert Gifford called their names and listed their achievements, recognizing their hard work and dedication to academics.

Assistant Principal Dr. Denise Bowes then announced the graduates to come to the stage, receive their diplomas, and shake hands with dignitaries. After many smiles, cheers, and applause, the final, radiant graduate from the Class of 2019, Sherinne Zhang, crossed the stage to accept her diploma. Amid celebration and cap throwing, Principal Abel declared the members of the Class of 2019 as official graduates of Midlothian High School. The band performed Brahm’s Finale, as the dignitaries, faculty, and graduates left the floor. As part of a beloved Midlothian tradition, the faculty formed two lines, through which the graduates of the Class of 2019 paraded after leaving the Siegel Center floor, allowing them to receive hugs, smiles, and well wishes.

Parents and friends anxiously gathered outside the Siegel Center to greet their seniors and take pictures. An unfortunate downpour opened over the departing seniors and their families, forcing the celebrations inside, but the merriment commenced well into the evening, as families headed to nearby Richmond restaurants to enjoy and fellowship dinner among friends. Not fazed by the inclement weather, the Class of 2019 relished the moment and closed one chapter of their lives before opening another.

We will miss you!