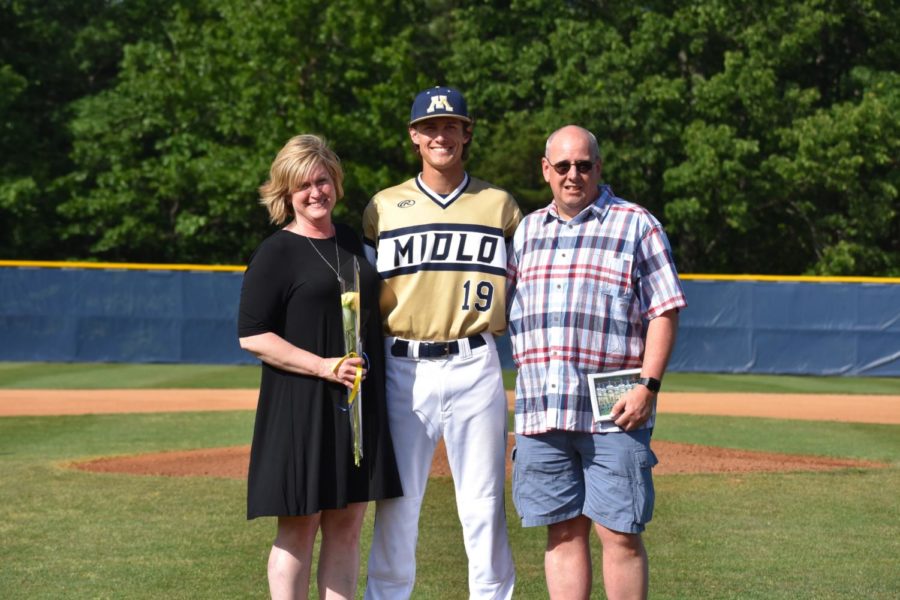 On Thursday, May 11, 2019, the Midlothian Varsity Baseball team took on the James River Rapids for Senior Night. This season, Midlo says goodbye to nine key seniors: Tyler Moore, Layne Pigford, J.P Jarratt, Evan Heine, Tyler Hawthorne, Carson Fuller, Camdton Furman, Logan Smith, and Grayson Sommardahl. To celebrate their seniors, the team hung jersey-shaped posters commemorating each player.  When announced, each senior made his way down to the field to join his parents.  After receiving flowers, the athletes cheered enthusiastically for their graduating teammates.

Manager Sommardahl previously competed on varsity for two years as a first baseman. He decided to take a break his senior year to manage the team, hoping to give assistance throughout the season. He shares that “It’s going to be heartbreaking [to the leave the team].” In the fall, he plans to attend Hampden Sydney College.

Pigford, who plans to study at John Tyler Community College before transferring to UVA, has competed on varsity in center field for the past two years. He shared,  “I’ll definitely miss the bond that we all have.” Fuller, who plays 1st base, will study at the University of Tennessee in the fall.

Furman, Midlo’s pitcher, and Smith, catcher, are both committed to study and play baseball at Randolph Macon. Of his senior season coming to an end, Furman remarked, “It’s definitely going to be sad at first, but I know that I’ll get to hang out with my team again.”

After recognizing each of the seniors, the team took the field. The game against River started off with a pitch by the Rapids. The Trojans fought with intensity, and at the end of the first inning, the game rested in a stalemate. However, the Rapids pushed ahead as they scored in the second inning, bringing the score to 0-1. A fire ignited in the team, and in the fourth inning, sophomore Carter Lovasz tied the score. By the seventh inning, River took the lead once again with another run. Although they played hard, the Trojans ultimately fell by one with the score of 2-1.

Following one of his final games with the seniors, junior Christian Chambers said, “I’m going to be sad that the seniors are leaving, but I look forward to stepping up to be a leader on the team next year.” Chambers will play as a senior next season, along with Alex Height and Hunter Beck. Sophomore Jackson Toler shared, “I’m sad. I didn’t know them well in the beginning, but over the year, we have gotten close. I’m going to miss them very much.” As the Class of 2019 continues on to the next chapters of their lives, they will be remembered for their leadership on the team.