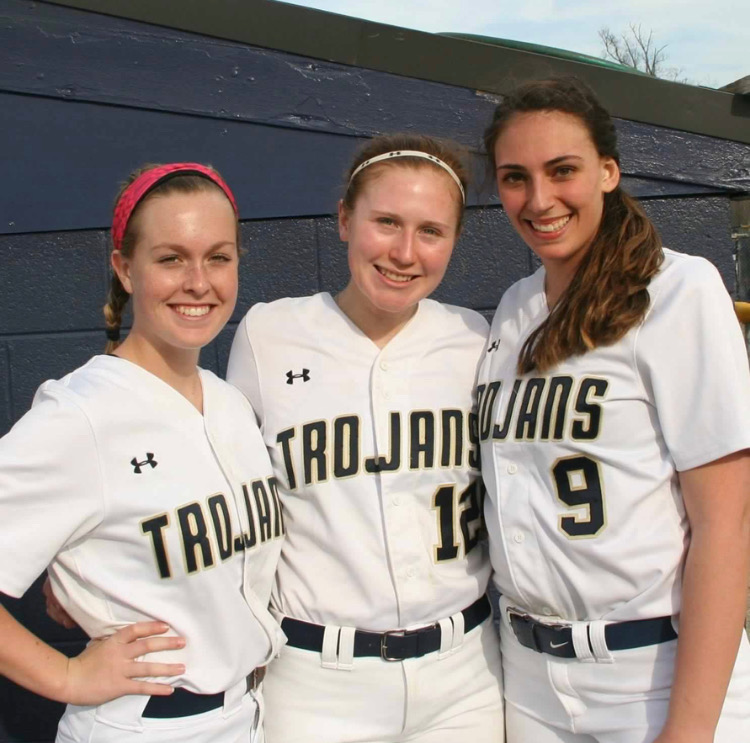 On Monday, May 6, 2019, the Midlo Varsity Softball team faced Hanover High School for their 2019 Senior Night game. Prior to the game, an announcer shared each senior’s name, along with their memorable moments on the team and their plans for the future. The parents of each player escorted them down the field, as their teammates cheered, and posters resembling softball jerseys decorated the fence, recognizing each of the three seniors: Lauren Lingle, Maggie McDermott, and Abby White.

Senior outfielder Lauren Lingle has competed in the sport of softball for nine years and began her journey on the Midlo Varsity team as a sophomore. As she finishes her last season on the team, Lingle shares, “It feels good to have made it this far.” Of the team she will leave behind, she shares, “I hope they all have good attitudes and play as a team.”

McDermott has loved softball since she was a child, and she has transferred that passion for four years as an outfielder for the Midlo Varsity Softball team. Although she will not continue her softball journey at the collegiate level, her love for the game will always exist.

Also a four-year varsity player, White has pitched for the Trojans during her entire high school career and has played the sport for 13 years. At the age of twelve, White decided that she wanted to play at a higher level. Because of this goal, she attended numerous camps and devoted herself to the sport. This hard work paid off, as next season, she will play softball at the collegiate level. White looks forward to the future, stating, “I’m excited for the next step at UNC Pembroke.”

After recognizing each senior and all their contributions to the team, the game against the Hawks began. Midlo threw the first pitch, marking the beginning of the game. The Lady Trojans scored a run from Campbell off of a hit from Emily Morrison, which fueled the Lady Trojans to play even harder. The Trojans continued to play with intensity, and after the first inning, the game rested at a 1-1 tie. Throughout the remainder of the game, pitchers White and Morrison fired strong balls, but the team failed to increase the score. After a long game, the Trojans were unable to pull ahead and lost 3-1.

Although this proved a tough loss for the Lady Trojans, Captain Cameron Long has hopes of leading the team next year and is determined “to beat our rival Manchester and make it further into the playoffs.” Midlo Softball’s Class of 2019 will be missed, but their contributions to the team will remain. Coach Kara Lenhart explained, “I’m sad to see them leave because they are a great group of girls, and I wish that I had the opportunity to coach them for longer. They will be missed.”  With young talent coming onto the team in the next seasons, Midlo looks to grow after the loss of these three key seniors.