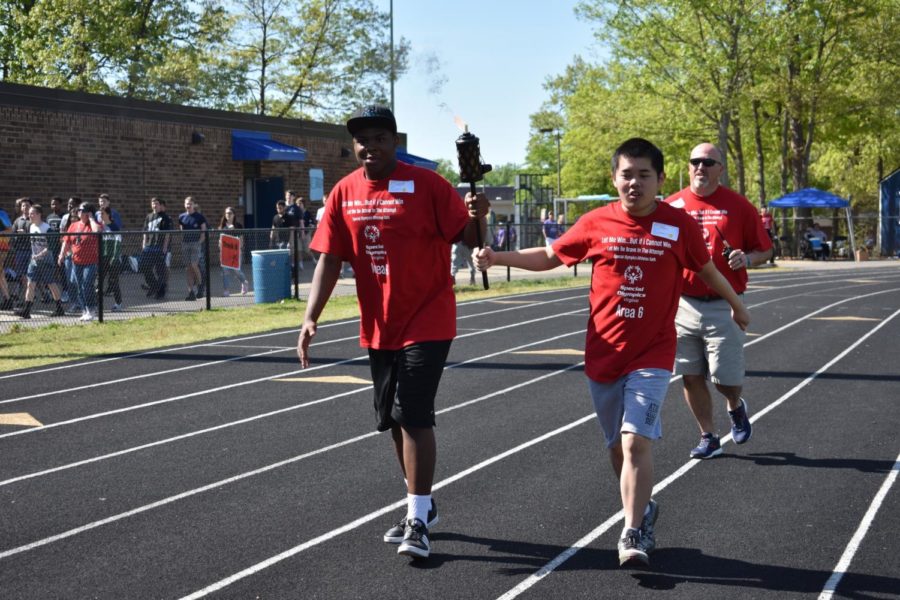 Terrence Reynolds and Danny Huang bring in the ceremonial torch before the 2019 Special Olympics, held at Midlothian High School.

To open the festivities, Coach Kevin Thomas and Midlothian athletes Terrence Reynolds and Danny Huang brought in the ceremonial torch, commencing the 2019 Special Olympics Track and Field Meet.  The Trojans started the day with a bang in the 200m race, as Reynolds took home the blue ribbon for his 1st place finish. Later, Jed Workman also won the 1st place prize for Midlothian in the 200m run, claiming the 4th place prize in long jump. With a winning mentality running throughout the team, Stephanie Kulyk placed 1st in the javelin and the 50m dash.  Next, Steven Patton earned the 3rd place ribbon in the long jump and 100m run. Determined to keep the streak going, Myles Howard eagerly competed in the 50m run and the softball throw, as well as Nii Patterson, who also participated in the 50m run and tennis ball throw.

The Special Olympics competition electrified the crowd and brought energy to both the athletes and the spectators. Announcer Ally Marmo commented, “My favorite part about announcing at the Special Olympics was seeing the smiles on the kids’ faces after crossing the finish line.” Sarah Nugent, another announcer, exclaimed, “It was amazing to see all of their smiling faces!”