IB Presents A Festival of Culture 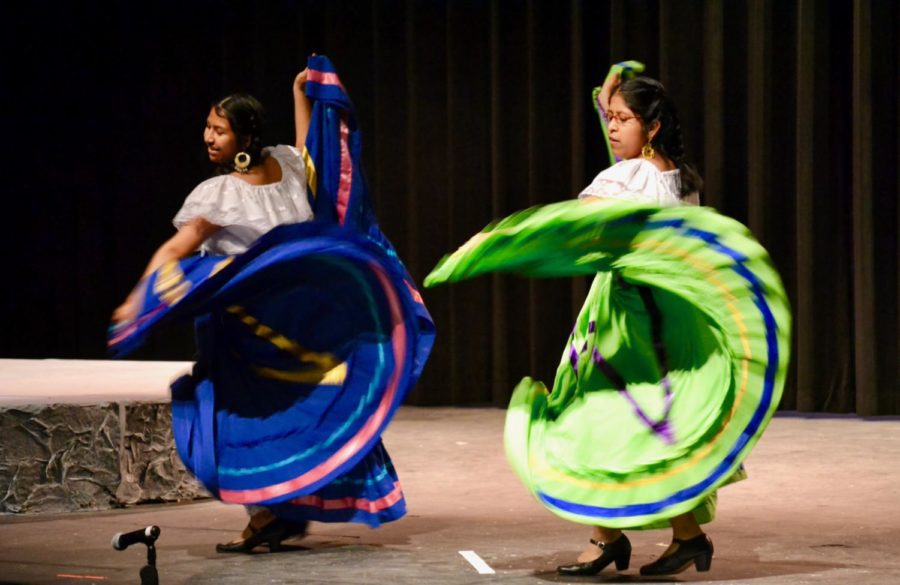 Alex Murias and Ashley Murias sway their skirts in a traditional Mexican dance at the International Festival.

Among the 7 billion people roaming our Earth today, each individual walks with a true appreciation and affinity for his own culture, carrying a particular cuisine, artistry, and fashion alongside that enriches and diversifies the world. On Thursday, April 18, 2019, Midlo’s International Festival presented a multitude of the cultures offered by the world through traditional performances, clothing, and food, granting a cultural awakening for all who attended. Hosted by Midlo’s International Baccalaureate (IB) Program and sponsored by the Mustard Seed Foundation, the annual International Festival celebrated each of the 7 billion people by simply giving a mere taste of their culture and their global influence.

Upon entering the Closed Commons, guests encountered a selection of traditional meals from around the world. From Italian pastas to Middle Eastern baklava, every assortment allowed individuals to circumnavigate the menu of the world, providing a simple taste of each culture and its cuisine. After guests stacked their plates and devoured their mouth-watering meals, the attendees traveled to the Open Commons for a cultural showcase, hosted by Midlo organizations, including Latin Club and Spanish Club. By visiting booths throughout the area, the guests pondered how language and its background play a role in enriching the society. To complement the language galore, the IB Art students showcased their IB Art Exhibitions as an art gallery for the event.

As soon as the guests finished indulging on the offerings of the world, the performance portion of the festival commenced. Delivering the show, seniors David Maddirala and Raven Coe announced introductions for each act through witty banter and humorous puns. Launching the performances, IB coordinator Mr. Mark Spewak surprised the crowd with an impromptu guitar performance. After the strum of his last note, the classic Fashion Show hit the runway. Directed by senior Nabiha Rais, Midlo students and faculty strutted through the auditorium aisles and stage, styled in the traditional fashion trends around the world, such as Vietnam, Finland, France, Lebanon, and Ancient Rome.

Initiating the next set of performances, Midlo’s Jazz Band played a harmonious concert, which included drums and saxophone solos. As a second solo performance, American Idol star Shayy Winn entertained the audience with her smooth vocals. Continuing the acts, Alex Murias and Ashley Murias spun and grooved in a Mexican Jarabe Tapatío dance, swaying their traditional skirts as part of the movement. Kicking off the next production, Dong’s Karate Academy and itsTaekwondo students demonstrated their defense and battle strategies. To accentuate their mastery in board-breaking, the academy asked for faculty volunteers, such as Mr. Spewak, Mr. Nicholas Kirkbride, and Mr. Atticus Finn, to hold and strike boards themselves.

Adding a modern approach to the event, Midlo’s Just For Show serenaded the crown through an a cappella performance, while seniors Da-Lan Pham and Raven Coe moved across the stage to every beat of the music. Each performance was accompanied by music, but Grayden Holiday played his own music, moving his hands swiftly across piano keys and creating a melodious sound. To draw the acts to an end, a traditional Bollywood dance, choreographed by junior Avnee Raje and performed by the IB Class of 2020, graced the stage as recognition for the vibrancy of Indian culture.

The International Festival proved an event that accented appreciation and education, as it acknowledged the abundance of diversity and culture within our world. Leaving the crowd in awe, the event provided not only a cultural awakening, but an unforgettable and enjoyable evening for all who attended.