Students Duke It Out Against Faculty on the Court 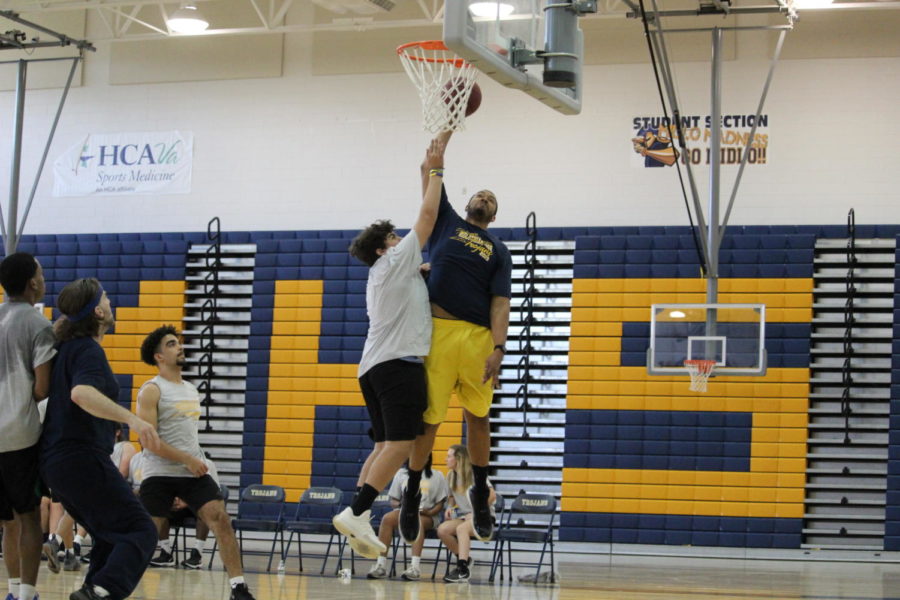 Kaeden Daniels attempts to block Mr. Jarhon Giddings as he jumps up to shoot during the Student vs. Faculty Basketball Game.

On Thursday, April 18, 2019, the rivalry between the Midlothian High School students and faculty hit its peak, as they competed in the annual Student Faculty Basketball Game in the main gym during 4th period. Mr. Tim Johnson welcomed the students and faculty to the gym as competitors and viewers entered. At the sound of the buzzer, the game kicked off as the referees, Jon Smiley, Aidan Jasinkiewicz, and Mr. Patrick Steele, took their places, along with coaches Jake Childers, Mason Schlensker, and Aidan Marsilli, and managers Abbie Campbell and Tiffany Bartee. Prior to the event, both teams practiced and prepared, hoping to win a game consisting of four nonstop 6 minute quarters. Student coach Jake Childers comments, “We diligently practiced for this game, and we came in ready to win.”

To start the game, Giddings and Klein duked it out in the tip-off, during which Giddings used his height to secure the advantage for the faculty team. The 1st quarter consisted of a sequence of back and forth movements, as both teams struggled to secure the ball and score. English teacher Ms. Crerie put up her best defense for the faculty team, as she surrounded sophomore Ed Clarke, leading him to turn over the ball. Mr. Davis airballed from the three point line, which was intercepted by Ashurst, who charged the ball across the court with a layup, ending the first quarter with a score of 9-8 with the students in the lead.

Mr. Jones began the 2nd quarter with a strong start for the faculty team using his swiftness to make a layup. The teams battled back and forth, as leading student shooters Klein, Clarke, and Johnson, maintained the students’ score, while the dynamic duo of basketball coaches, Mr. Giddings and Mr. Pruitt, led the faculty team in the 2nd and 3rd quarters. The 3rd quarter concluded with a score of 28-26, with the students slightly leading.

As the 4th quarter commenced,  the students and faculty prepared to make it a memorable game for the audience by giving it all their effort in the last quarter of the game. The combined teamwork from the faculty with a strong layup from Mr. Jones and a dunk from Mr. Giddings brought the faculty to a slight lead in the first few minutes of the quarter. As Klein dove to protect the ball from Mr. Erby, he passed the ball to teammate Daniels, who shot but was easily deflected by Mr. Giddings.

With 1 minute and 23 seconds counting down on the clock, the score was tied 41-41. As the game reached a heated climax, and the score retied with 16 seconds left, the students and faculty screamed in support of their favorite players. To end the game, Mr. Erby made a steal and passed to Mr. Layton, who set Mr. Giddings up for a perfect layup to let the faculty score the gold in the annual Student Faculty Basketball Game, 45-43. Mr. Giddings comments on the event, sharing, “It was a lot of fun overall.”