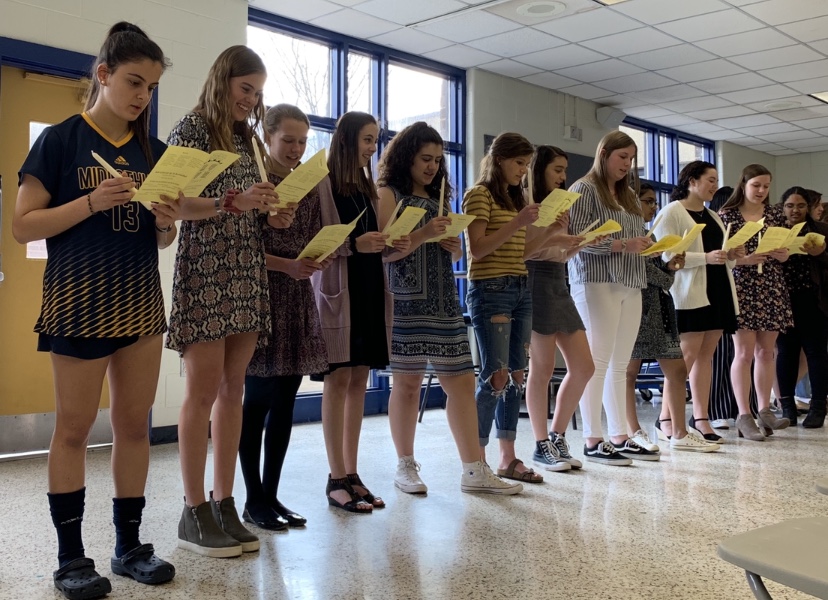 The 2019 National Spanish Honor Society Induction took place on Wednesday, March 20, 2019, in Midlo’s Closed Commons. The Midlo Spanish Department, including Señora. Travis Jimenez and Señora. JoAna Smith, attended the ceremony to welcome the largest number of inductees NSHS has seen in years.  National Spanish Honor Society induction is a highly esteemed recognition due to the requirements that applicants must meet. Eligible students must take at least three semesters of Spanish and be a sophomore, junior, or senior. Students must also have a teacher recommendation supporting their eligibility for a membership. Finally, all members are expected to continue their Spanish studies until they graduate from Midlothian High School.

Sra. Joana Smith explains the Sociedad Honoraria Hispánica (SHH) as “an honor society for high school students enrolled in Spanish and/or Portuguese, sponsored by the American Association of Teachers of Spanish and Portuguese (AATSP).” She told the history of the society by explaining its roots. “The SHH was formally organized as the Spanish National Honor Society in 1953. The name was changed to Sociedad Honoraria Hispánica in 1959. At present, there are over 2,900 national and international chapters of the SHH. The mission of the Sociedad Honoraria Hispánica is to recognize high school achievement in Spanish and Portuguese and to promote interest in Hispanic and Luso-Brazilian studies. Each year, the SHH contributes more than $160,000 in awards to student members of the SHH. The most prestigious of the awards are college scholarships given to 60 high school senior SHH members and the Student Travel Awards given to 24 high school junior SHH members.”

Gaining a special cord for graduation is not the only benefit of achieving this academic reward. NSHS membership demonstrates a proficiency in Spanish speaking and comprehension skills. Congratulations to the following 2018-2019 National Spanish Honor Society Inductees: