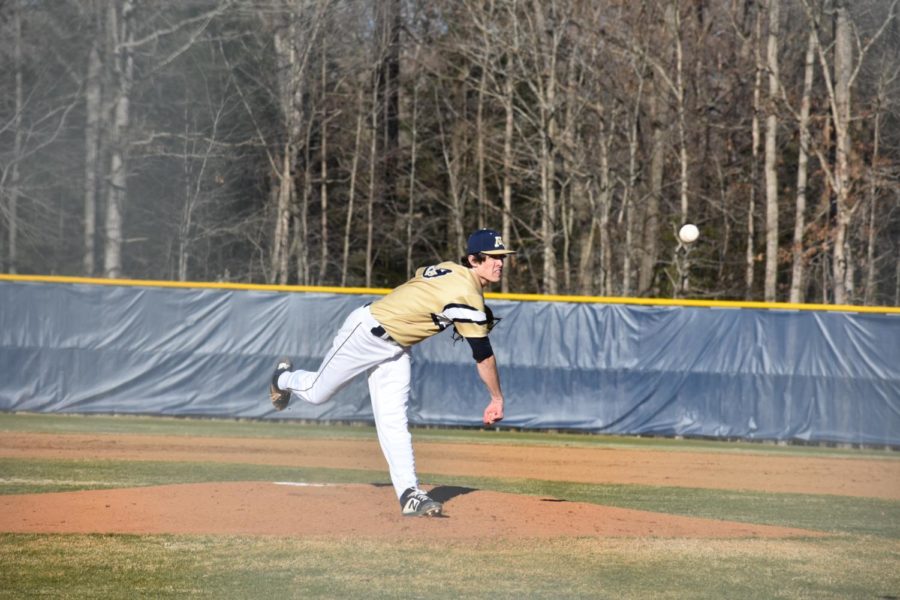 Camdton Furman pitches a no hitter with 7 strike outs.

On Tuesday, March 12, 2019, Midlothian High School’s Varsity Boys Baseball team kicked off the season with their first game against the Patrick Henry Patriots on their home field. Announcers welcomed both teams to the diamond, including the starting Midlo players: senior Camdton Furman at pitcher, senior Logan Smith at catcher, senior Evan Heine at first, junior Christian Chambers at second, junior Hunter Beck at shortstop, sophomore Carter Lovasz at third, senior Layne Pigord at left field, senior J.P. Jarratt  at center, and sophomore Zach Vanderslice at right. Junior Luke Williamson describes the atmosphere leading up to the game as, “energetic and ready for a good game.” Last year, the Patriots defeated the Trojans 10-0. Now, the team came out to play with one goal in mind: to win. With this determined mindset, the Trojans resolved to work hard, and they demonstrated this determination throughout the first 5 innings of the game.

The game began with a slow start, as both teams scored 0 runs in a quick first 3 innings, but the Trojans came back in the 4th inning with a new resolve to win. The top of the fourth kicked off with a foul hit towards Pigford, who jumped up to catch the ball and earn the out for the Trojans. Unfortunately, he cut his leg on the fence in the process, temporarily removing him from the game. In the bottom of the fourth, J.P. Jarratt hit a big RBI single, bringing the Trojans to a 2-0 lead with runners remaining on 2nd and 3rd, as well as reaching the top of the batting order with only 1 out. Carson Fuller followed up Jarratt with a double off the fence, leading the team to 5-0 lead for the fifth inning.

The Patriots continued with 0 runs throughout the top of the fifth, and the Trojans used their advantage to lead them to success in the game. Hunter Beck landed a single, while Matthew McRaney brought in two runs for the Trojans with a solid hit into the field, ending the game through the slaughter rule with a score of 10-0. Midlo pitcher Camdton Furman proved a key component to the Trojans’ success at the season opener, throwing a five inning no hitter during which he struck out seven Patrick Henry players and walked only one, an impressive feat against this competitive team.

JMU commit Christian Chambers comments on the game, sharing, “We had a great win with a lot of energy and fun being expressed throughout the game.” Teamwork is a large element to baseball and a large part of the success Midlo met against the Patriots, as Coach Brad Chambers encourages this ideal throughout his practices. Baseball Manager Claire Horansky expressed, “Their hard work and focus on teamwork led them to success in their first game, and we hope it will continue to benefit them for the rest of the season.”

The Trojans battled against L.C. Bird on Thursday, March 14, 2019, where they continued their success at a score of 12-1.  Come out and support the Trojans at their next game at Clover Hill on March 19, 2019.