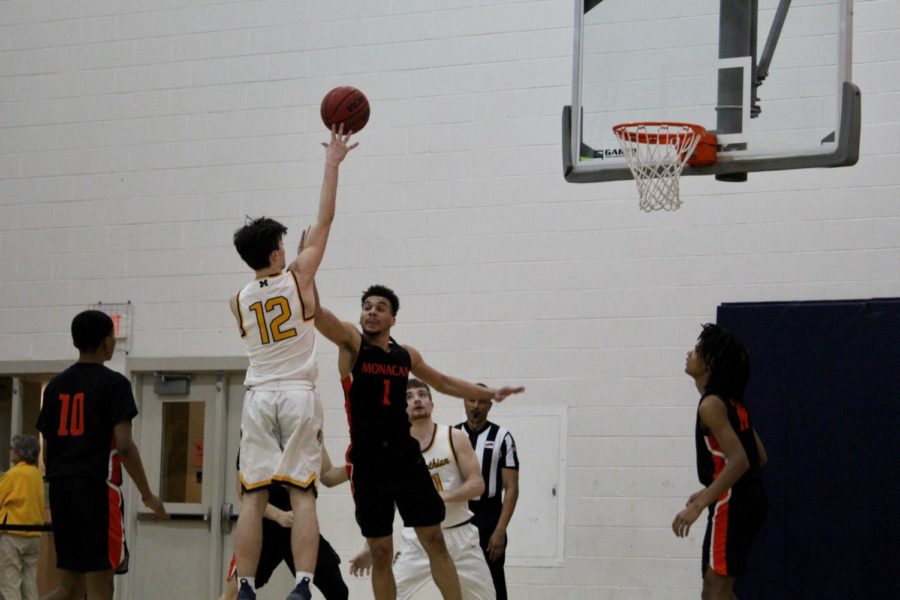 Sophomore Aidan Marsili goes up for a jump shot against the Monacan Chiefs.

On Friday, February 1, 2019, the Midlothian High School boys varsity basketball team hosted the Monacan Chiefs in a top-notch rivalry game. The Trojans entered the game with a 9-11 record; whereas, the Chiefs came in off an upset against the L.C. Bird Skyhawks.

The first half started with a bang and set up the game to be a close match. Star senior players Will Pomeroy and Henry Davis scored point after point, while sophomore Aidan Marsili proved a tough defender. Midlo’s student section erupted with excitement, as the Trojans traded point for point with the Chiefs. Sophomore Carter Lovasz held off the defenders for senior Neil Richburg, who rallied layups to tie the game at 27 before halftime. Gearing up for the second half, the boys headed out to have a pep talk from Coach Jarhon Giddings, while the Midlothian Trojanettes performed a routine for the fans in the student section.

After halftime, the Trojans came out with high intensity and fought hard to gain a lead on the Chiefs. During the third quarter, Davis sunk multiple threes and gave the Trojans a leg up on Monacan. Richburg made critical steals that set up seniors Mason Schlensker and Pomeroy for easy points. Davis drove through the Chief defense and drew several fouls, earning foul shots. After a hard-fought quarter, the Trojans entered the fourth quarter with the score tied at 43.

The final and fourth quarter started tough for the Trojans, as Monacan sent in their best player for the last quarter despite having four fouls. The Chiefs started to pull away from the Trojans, while the student section howled; however, as the clock ticked down, the Midlo fans supported the players until the end. The Trojans ended up short with the score of 68-55, giving the Chiefs the victory on Midlo’s home court.