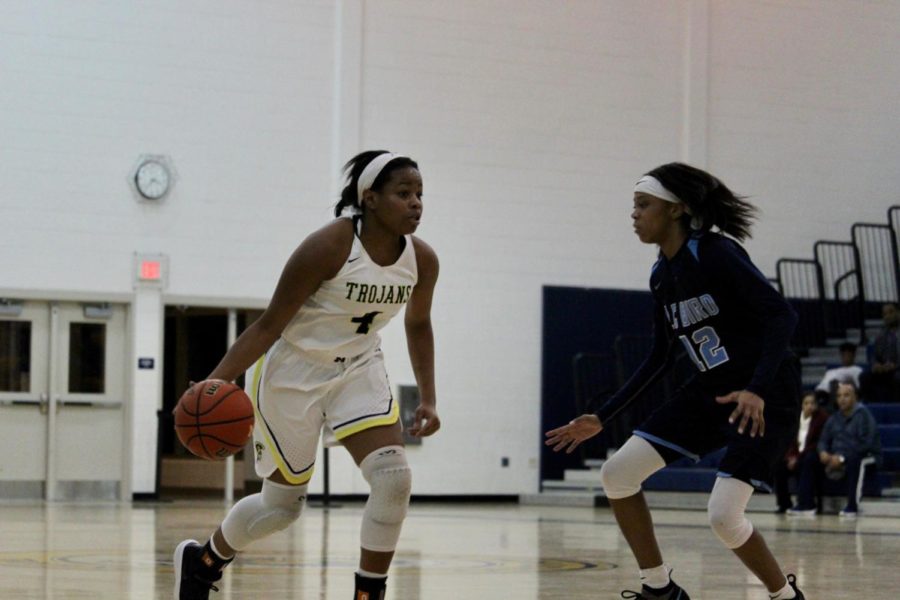 On Thursday, January 17, 2019, the Midlo Lady Trojans Basketball team battled it out at home against the L.C. Bird Skyhawks. As the game took off, Bird won possession in the jump, and for the first few minutes maintained possession. Bird kept the ball on their end by utilizing quick passing to maneuver around Midlo defenders. With 5:44 left in the half, the score rested at 7-0 in Bird’s favor, causing Midlo to call a timeout. After breaking from the huddle, Katrina Kirby carried the ball up the court, faking out her defender by dribbling the ball behind the back. From there, she made a fast break to the basket and drew a foul from a block. Following this, Midlo continued to experience trouble with transitioning and maintaining possession, as Bird continued to intercept the ball. Due to this, the score at the end of the first quarter rested at 20-4.

As the second quarter began, sophomores Tatyanna Creecy and Jenna Shadders showcased their strong teamwork with a series of passes, which moved the ball down the court. Midlo had multiple shot opportunities but were unable to sink and execute their motion offense. With 6 minutes left in the quarter, Midlo still hadn’t scored.

Midlo began to pick up speed as senior Jessie Dziedzic hit a 3 pointer at 4:43 left in half, bringing the score to 28-7. Sophomore Tiffani Bartee followed this with a shot, putting more points on the board. Next, sophomore Maddie Fath drove down the court and passed to Abbie Campbell, who completed a shot. Bartee scored yet again after connecting several passes to mix up the Bird defense. Keeping up the momentum, Bartee rebounded her shot to earn another basket and free throw, continuing with another 3 pointer with 30 seconds left in half. As the half closed, the score was 41-20.

As the second half commenced, the Lady Trojans led a charge down the court, leading junior Katie Gaeth to earn foul shots.  As the quarter went on, the team made short, quick passes around the arc in an attempt to scramble the Bird defense. The Trojan intensity increased, which led to baskets. Fath drove down the court and executed several passes, and the ball ended up in the hands of Campbell, who shot the ball, which was recovered by Dziedzic. With 5:22 left in the third quarter, Campbell dribbled down the court and sunk a three pointer, altering the score to 49-28. After rebounding a Bird shot, Campbell drove in and earned two points from foul shots.

After many give-and-go passes, Midlo drove down into the paint, stalled by the LC Bird defender, and then kicked out a pass to Bartee, who made the lay-up. With 2:50 left in the third quarter, the score began to shrink at 49-32. Kirby, stopping a Bird drive, stole the ball and passed it forward to Creecy, and after several shots and rebounds, Taylor Wiggins landed a shot. The crowd intensified as Shadders stole the ball from a Bird attacker yet again. The third quarter ended with a score of 58-35 in Bird’s favor.

Throughout the fourth quarter, the Trojans drew fouls and gained multiple foul shots. Senior Dziedzic drove down the court, making a lay-up, and that intensity continued as Bartee sank a three-pointer.  The game ended 79-50 with a LC Bird win, but the Trojans fought hard and did not make this an easy win for the Skyhawks. The Lady Trojans’ next game will be on Friday, January 25, 2018 away at James River High School.