A Winter Storm of Enthusiasm 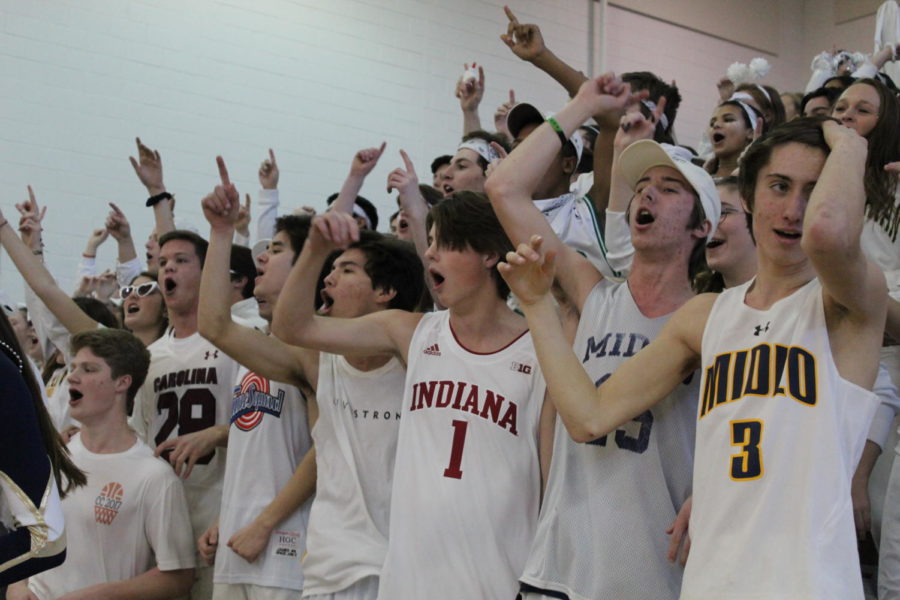 Juniors use their voices to cheer as loudly as possible and win the victory spear at the Winter Pep Rally.

In the midst of snow storms and school closings, Midlo students still had time to show their spirit and love for Midlothian High School at the Winter Pep Rally, which took place on Friday, January 11, 2019. Through their colorful apparel and ear piercing screams, the students rose to their feet, most covered from head to toe in their class colors, enthusiastically ready to conquer the Winter Pep Rally and secure a win for their class. The freshmen wore bright and radiant orange gear, while the sophomores attempted to intimidate the competition as underclassmen with the darkest color of all, black. The juniors brightly showed their spirit by covering themselves with all-white clothing, while the seniors walked in with a full dose of red, a color demonstrating their boldness and confidence.

After hearing the roar of the drum line passing each classroom, students anxiously awaited the beginning of the Winter Pep Rally. Storming into the gym, students scouted the bleachers for the best view of the event. The pep rally enthusiastically began with the introduction of the winter sports teams. Called by the Voice of Midlo, Mr. Tim Johnson, the Medford basketball team and cheerleaders, indoor track team,  swim team, girls and boys basketball teams, and the wrestling team confidently paraded into the gym with the beloved Trojan mascot as their leader.

No Midlo pep rally is complete without a couple of pep rally games, which the students excitedly joined. First, a male and a female from each class participated in a one-on-one game of free throws in a game of Knockout, slowly eliminating one individual from each class if they failed to make their shot. After a game of Knockout that left students on the edge of their seats, every class participated in a friendly game of Hungry Hungry Hippos. Each team wheeled a class contestant lying flat on a wheeled cart holding a laundry basket into the ring of colorful balls. The object of the game was to capture as many balls as possible in the laundry carts to win.  A scene of hilarity ensued as the hungry hippos on the floor gobbled up the balls. Next, in a traditional game of Musical Chairs, students grabbed seats as quickly as possible each time the music stopped, as Mr. Thomas removed chairs one-by-one. On each of these games, Midlo students worked hard to obtain points for their class, showing off their skill, energy, and motivation to win.

Following the pep rally games, Midlo cheerleaders drew from the endless supply of enthusiasm and high energy from each class. In an effort to overpower the other classes, each class used their voices to scream as loudly as possible in the famous victory cheer. Ending the event on a high note, Principal Shawn Abel awarded the victory spear to the class winners, the juniors, many of whom stormed the floor with excitement.

Earned based on their wins in the games, color coordination, and countless spirit, the juniors proudly raised the spirit stick over the rest of the classes to celebrate their first place pep rally win. Through their heavy participation in the pep rally, the sophomores came in second, while the freshmen earned a close third place. This year, the seniors failed to place in the pep rally due to their unprecedented early exit during the event. Although the seniors in attendance showed their class pride through bold red attire and loud enthusiasm, due to a large portion of the seniors opting not to attend the Winter Pep Rally, the other classes had a huge size advantage. Senior Class Treasurer Da-Lan Pham, remarked, “There was a different kind of attitude this year in the pep rally because of the lack of attendance. I hope the seniors show up at the next pep rally, especially for the dances.”

Despite the weak senior turnout, all of the Midlo students in attendance remained engrossed in the pep rally, as evidenced by their undeniable exhilaration and enthusiasm throughout the event. The fun mix of class games proved especially entertaining, making the Winter Pep Rally an unforgettable time for all, as the the winter sports teams basked in the support of their Midlo family.