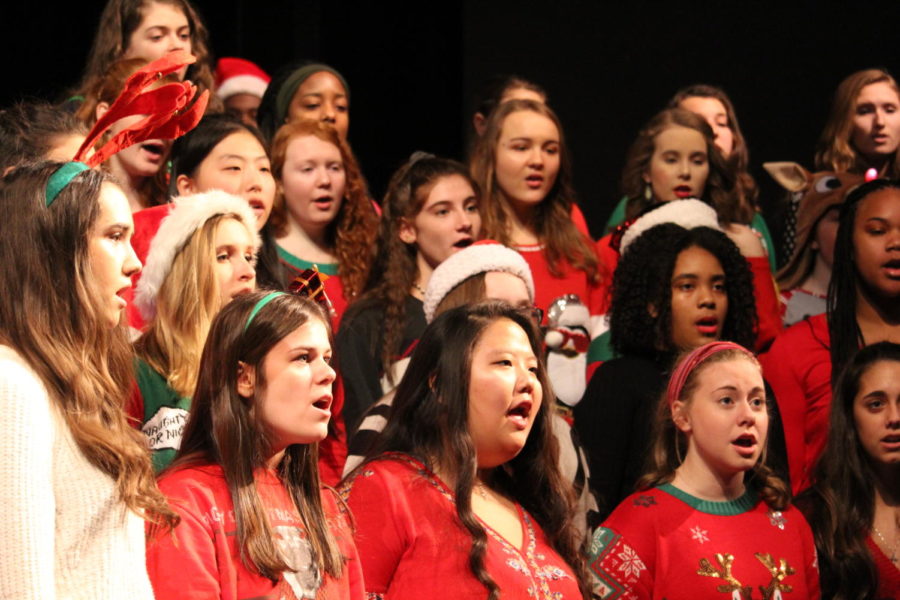 During second period on Wednesday November 19, 2018, students attended the annual Winter Concert performed by the Trojan Chorus, Band, and Orchestra. Students from all grade levels gathered to get into the holiday spirit and hear their favorite tunes. Members of the band and orchestra decorated their instruments with festive tinsel and lights and donned Santa hats, while choral students joined marked the festivities by wearing their most outgoing holiday sweaters. As the audience filed into the auditorium, the Trojan Band, under the direction of Mr. Gordon Rawls, performed Lullabye Carols and stunned the audience with their dramatic dynamics. Senior Isaiah Morton greeted the students as the Master of Ceremonies.

The guitar class, led by Mr. Taylor Fletcher, opened the show by performing the piece Angels We Have Heard on High while dressed in flannels; the audience responded with energetic applause. The Midlo Chorus, directed by Mr. Atticus Finn, kicked off their performances, as Just for Show sang Carol of the Bells. Next, the attention focused on the Vocal Ensemble, which performed All I Want for Christmas is You. City Lights, the all girls chorus, continued the string of choral performances with the song Holiday Gloria.

After these remarkable choral performances, the Midlothian Orchestra, directed by Fletcher, performed a lively piece Five Ukrainians in a Bell Tower and continued with the piece Christmas Eve/Sarajevo. This intense and upbeat song intrigued the audience with the use of an electric violin by Paul Cline, electric guitar played by Rhys Schwan, and drum set. Before the finale, Just for Show performed the pieces No Room, No Room and That’s Christmas to Me.

Finally, the Trojan Chorus, Band, and String Ensemble united to finish the assembly with a bang. They first took the audience on a journey by performing Sleigh Ride. This piece created a wintry atmosphere, including percussion sounds, along with trumpets to sound like a horse’s neigh. Next, the ensembles performed Christmas on Broadway, which features various contagious Christmas tunes, such as: It’s Beginning to Look a Lot Like Christmas, We Need a Little Christmas, and My Favorite Things.

The concert closed with the classic Hallelujah Chorus. The chorus invited teachers up to sing alongside the ensembles. The angelic voices of the chorus, paired with the bold melodies of the band and orchestra made this last piece memorable. After these songs, the auditorium erupted in cheers. As the students departed, the Trojan Band performed Christmas Medley, a mix of multiple favorite Christmas carols. Sophomore Emily Partee reflected, “I like showing off all the hard work that the Music Department put in to create this performance.” The countless hours of practice paid off, for students and teachers alike left the concert filled with holiday spirit.