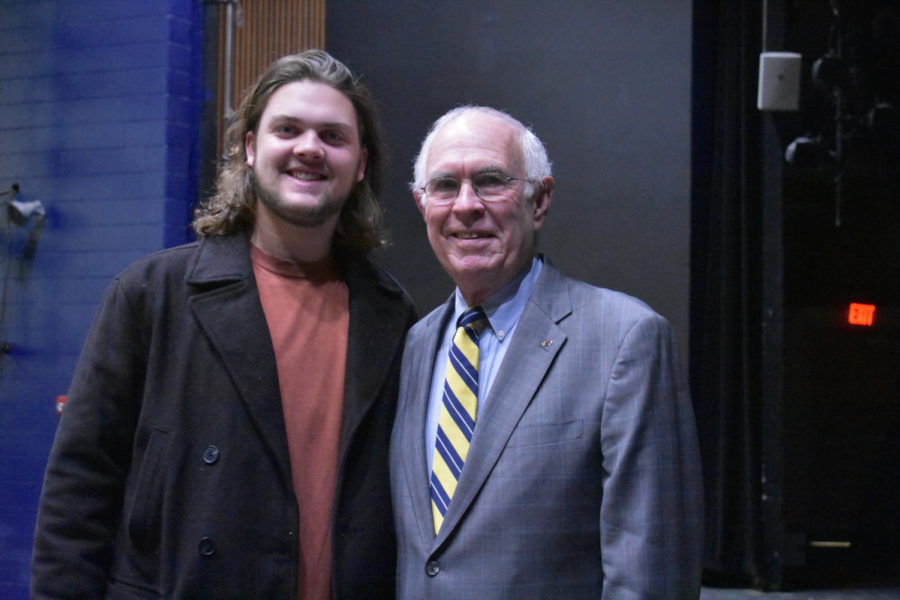 Durrette’s grandson, senior Carson Fuller, opened the assembly with a few words about his grandfather and what he does for the people of Virginia. He explained that Durrette is an everyday citizen; he attended Franklin High School, played sports, and attended the Virginia Military Institute after graduation. He furthered his education at John Hopkins University, earning his Masters in Political Science. After school, he proudly served in the United States Air Force during the Vietnam War, and following his military service, he began a career in Virginia politics, serving multiple terms as a Virginia State Delegate, and in 1985, he ran for the office of Governor of Virginia. He was recently inducted into the Virginia Lawyers Hall of Fame. Fuller wrapped up his speech about his grandfather by saying, “While Mr. Durrette has many accomplishments and reasons to be admired, the most important one to me is that he’s my grandfather.”

After his grandson’s heartfelt remarks, Mr. Durrette introduced himself and explained the backstory to his career as a politician. He started with one of his most asked questions: “Did you have any interest in politics throughout high school?” The answer, interestingly enough, is no. He never had a true passion for political science until he entered college. After his service in the Air Force, he became a lawyer and worked with several different people, helping to solve and create strong arguments to help those in need. His most recent cause is the non-partisan group, OneVirginia2021.

OneVirginia2021 is a non-partisan nonprofit that aims to put an end to redistricting as a whole. Redistricting, the division of new political district. This occurs after the census and reapportionment of the members of the House of Representatives requires redistricting with the states. Currently, that process and the redistricting of the districts for the State Senate and for the House of Delegates is controlled by the Virginia General Assembly.  Durrette is working to get a Constitutional amendment passed in the state of Virginia. He and his team proposed to a judge a new redistricting plan that made Virginia districts more compact, benefiting those living in the areas. He stated, “Those who are making the districting lines are making them to support themselves and those who are close to them instead of those who need it. That’s just human nature.”

All AP government classes attended the assembly, including Mrs. Regina Warriner and Mr. Scott Jenkins. Mrs. Warriner commended Durrette for his informative presentation, remarking,  “This assembly was an exciting opportunity for students to learn first-hand about redistricting reform efforts that may impact their vote in the future.  Mr. Durrette’s passion for fairness and equity in the political process was evident in his delivery, and I’m thrilled Midlothian students were inspired by it as well.”