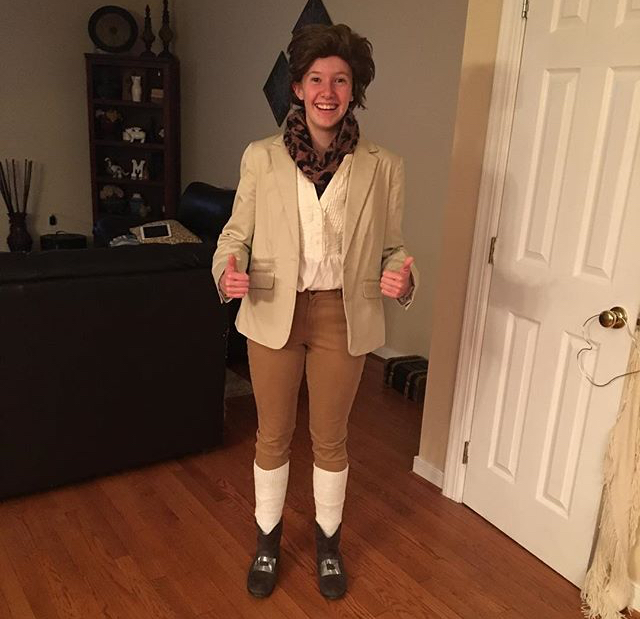 Chloe Martin adorns her costume as Jean-Jacques Rousseau for the Enlightenment PBL.

On November 7th and 8th,  all of Mrs. Cammeron Bennett’s Honors World History II classes adorned their best costumes for the annual Enlightenment PBL, which entails a research, written, and interactive piece, allowing the project to come to life. Unlike many others, this project incorporated direct participation. Mrs. Bennett asked students to dress as an enlightened philosopher and act as they believe their character would. To further interest the students, she asked them to bring food to share with the class, forming a communal dinner party.

The students’ first job was to select a historical figure of the Enlightenment period in Europe. They were then asked to write a two paragraph research paper, written from the perspective of their character on the role on government. On the day of the dinner party, students dressed as their chosen enlightened philosopher or historical figure and walked around the room, or salon, speaking and acting as such character. They were allowed an index card with tidbits of information. This was a new addition compared to previous years, encouraging students to know more about their figure without reading directly from their notes. The PBL also incorporated a small game during which the students guessed the identities of their fellow classmates’ characters, which was, in Chloe Martin’s opinion, “the most interesting part,” adding, “I loved seeing how others put so much effort in their project.”

Martin wasn’t the only student who thoroughly enjoyed the project. Sophomore Rand Shaikhqasem dressed as George Mason and thought the project was, “A good activity where we were allowed to get up and move around.” Emma Diehl agreed, saying, “I dressed as Rene Descartes, and it was a great way to learn about a subject.” She then added, “Although Descartes invented analytical geometry, so I kind [of] don’t like him.” Mrs. Bennett said this was probably her favorite project, adding, “I love seeing history come to life and watching the students dress up and act in character.”