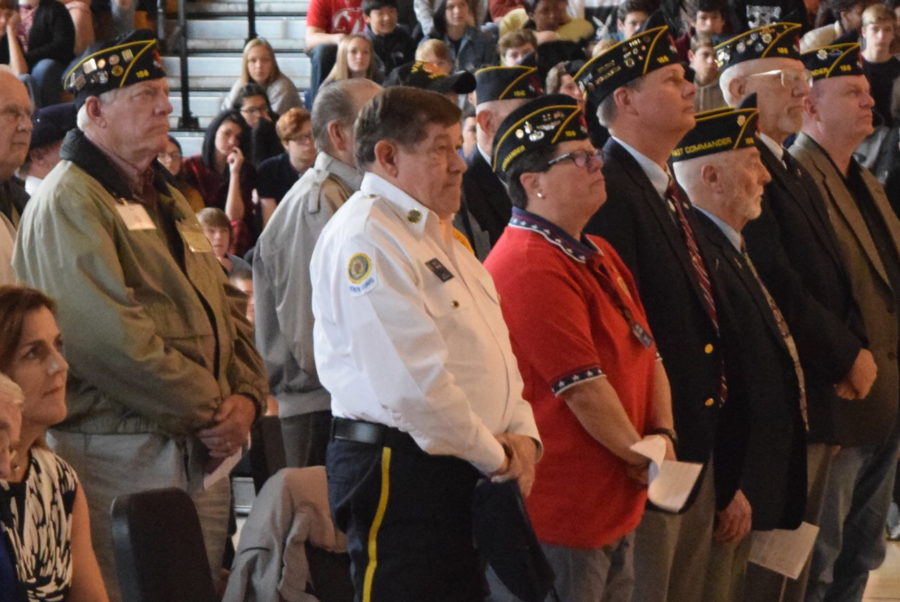 1,700 Midlothian High School students, faculty, and honored guests gathered in the gym on November 9, 2018, to celebrate and honor veterans at the first annual Military Appreciation Assembly. James River High School’s Joint Service Color Guard kicked off the event with the Presentation of Colors, and Spencer Willett followed up with the Pledge of Allegiance. Midlothian High School Choral Director Atticus Finn led Just For Show in singing a festive rendition of the Star Spangled Banner, full of unique harmonies and choral twists. Following the pledge and the Nation Anthem, Principal Shawn Abel welcomed the students, faculty, and special visitors, providing them with the perspective of anxiously awaiting a family member’s return from serving our country, an idea that senior Jacob Benzinger claimed to be “eye-opening.”

Principal Abel asked students to stand if their parents previously served or currently are serving in the military, then asked for anyone else to stand if they had any family members involved with the military.  Around eighty-five percent of the students stood, and the whole audience applauded in support of the men and women who risk their lives daily in support of our country.

CCPS Director of Communications Mr. Timothy Bullis began by thanking the veterans for their service and commending the Midlothian student body for their attention. He described the process of creating the American flag, and what it means to be an American. After his inspiring talk, the Jazz Ensemble, directed by Mr. Taylor Fletcher, performed the Armed Forces Medley, while a slideshow projected images of military personnel associated with Midlothian on a far wall behind the dais. Senior Hannah McCracken comments, “I thought it was awesome what they did with the slideshow, especially since I have family in the military.”  Mr. Daniel Abell followed the moving slideshow, sharing an inspiring story about military hero, Second Lieutenant David R. Kingsley, a bombadier who sacrificed his life for another during his service. In 1944 on a bomb run, his aircraft was severely damaged by fire. He administered first aid to wounded gunners, and as orders came to bail out, one of the wounded soldiers’ parachutes could not be located. Second Lieutenant Kingsley “unhesitatingly removed his parachute harness and adjusted it to the wounded tail gunner,” and although the “aircraft would disintegrate at any moment,” he helped the wounded service members bail out to safety and tragically perished in the crash. Mr. Abell’s moving story captured the attention of all in attendance, vividly depicting the sacrifices made by those who serve in the United States military.

Mr. Abell then introduced the keynote speaker of the day, Command Sergeant Major Ronald Smith, Jr., who explained that he chose to serve in the military after high school. To engage the students, he shared a special fun military fact:  instead of saying, “Yes,” the correct reply is: “HOOAH!” After inviting the students to say “HOOAH” with him, everyone smiled together, as he continued. Command Sergeant Major Smith explained the details of his deployment, sharing that his unit went to a “foreign country to remove a dictator,” referencing the operation to remove Manuel Noriego from Panama. He opened the eyes of the students, as he detailed  “jumping out of an aircraft 400 feet over a jungle near an international airport.” The students found his perspective jaw dropping, enthralling all 1,700 of them.  At the end of his address, he invited all students to go and thank the veterans for their service, adding, “You have no idea what [they’ve] truly done for our nation.”

Nothing Strong Enough by Zoe Claudel

There are no words strong enough

Nothing strong enough to show our appreciation

We live our lives in freedom and happiness

We owe it all to you

You protect our backyards

You allow our children to play

You allow our children to live in freedom

Thank you for your courage

Thank you for your families

Thank you for your service