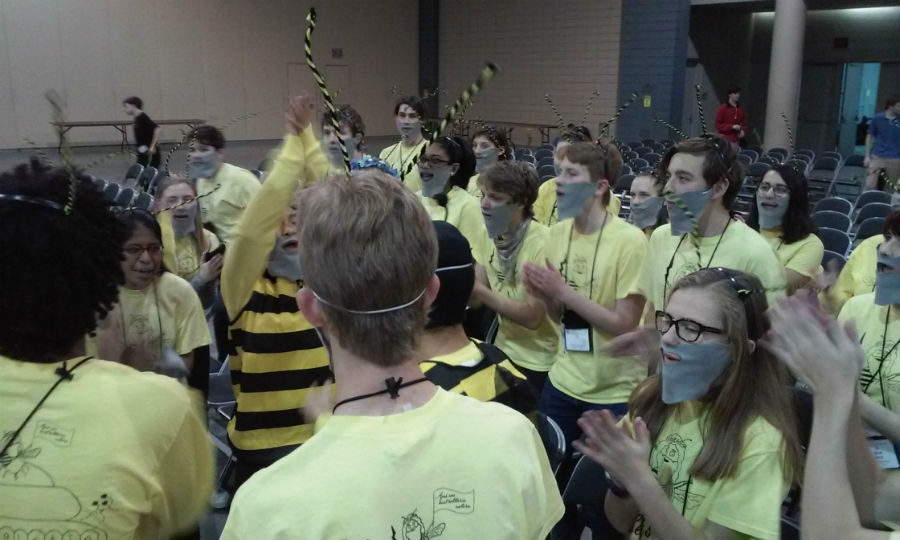 The spirit competition buzzed its way through Latin Convention with a bee theme this year.

On November 18 and 19, 2018, twenty-nine Latin Club students joined their sponsor Mrs. Amy Petersen, as they attended the annual Virginia Junior Classical League Convention, also known as the VJCL or Latin Convention, at the Greater Richmond Convention Center. Students from all over Virginia came together for the two-day convention. The Midlothian Latin Club is heavily student-run, with occasional aid from Mrs. Petersen. The VJCL held a canned food drive. alongside an overnight competition, in which all chapters were encouraged to bring canned food items that would be turned into points for their group. All canned food items were then donated to a local food bank. The VJCL also held a coin war, which meant that every cent in coins counted as one positive point towards their group, while every cent in bills counted as one negative point. The losing group performed a silly act on stage. The chosen charity of the officers with the most points received all of the money brought from the coin war.

The first day of the convention, Saturday, November 18th, started with registration that lasted from 8:00 AM to 9:30 AM. After each group checked in, they participated in the spirit contest from 9:45 AM to 10:00 AM. Immediately following the spirit contest, students attended the Salvete Assembly until 11:00 AM, which included a “call to order” by VJCL President Daniel Fischer and keynote speaker Nikki Carroll from the Trinity Episcopal School. While other small events happened simultaneously, lunch transpired from 11:15 AM to 1:30 PM. During lunch, students interacted with other teens from all over Virginia. After a short break around 2:00 PM, Ludi Frivoli began, which was when all of the different groups held an interactive games. Midlo’s Latin Club held the Roman ball game, Trigon. Latin 3 student Niral Saravanan shares, “The Harry Potter section was really cool! We got to learn about magic in ancient Rome and how that combines with Harry Potter.” From 2:30 PM to 4:00 PM, the lower division enjoyed a costume contest, followed by the Roman banquet, during which everyone dressed in togas and enjoyed the Latin-based foods that served.

After the banquet, everyone enjoyed storytelling, followed by dance and karaoke in the Grand Ballroom. Later during the VSCL reception, high school seniors met Virginia Senior Classical League officers, learning the details of  VSCL and its requirements.

Bright and early on Monday morning, students returned to the convention center to attend the Midvete Assembly, during which all VJCL officer candidates gave speeches, trying to convince those in attendance to vote for them as the new VJCL officers for 2019. After a creative and graphic art awards ceremony, a college fair, and an academic decathlon, students rushed to the exhibit hall lobby to vote.  Finally, from 12:30 PM to 2:30 PM, the academic awards ceremony took place in the amphitheater as well as the last spirit contest for the large delegations.

On his first Latin Convention, Latin 1 student Connor Bingham commented, “Everything went wonderful!” Mrs. Petersen added, “The thing that I am most proud of is seeing the students really stretch themselves and grow and seeing how welcoming they were with other people, wanting and making new friends. They made it all really easy and fun to be their sponsor.”